Our flight took to the skies early morning, and we arrived in Chiang Mai before noon. Neither of us had ever been to the city before, but had heard it was a must see. The city lived up to it’s reputation, and then some.

While having no real plans, we figured we’d stay in Chiang Mai for a few days, head north to the hippie town of Pai, and then come back to Chiang Mai before taking off to the islands down south. As we left the aircraft, we realized we had no idea where to go in Chiang Mai, and made friends with an eccentric and memorable character named Ryu in hopes of help. An odd man to describe, he was wearing Google Glasses when we first saw him, and carried multiple smartphones on his person that he spastically switched between as we interacted, his mind raced from one unfinished thought to the next. He gave us a general direction to head in, and bags in hand we attempted to flag down a cab. Instead, we found a Song Tao, which was even better. 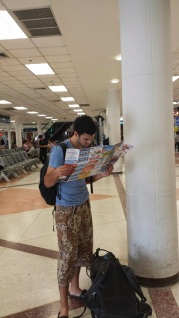 Jason has spent the past year teaching in a town called Satun, which is a relatively small buddhist and Muslim city located in the South of Thailand. During his time here, he’s picked up an impressive amount of the language, and it has been an invaluable resource so far. He told the driver a general area, and we got dropped off in the city center. With no particular place to stay just yet, we grabbed some street food and began wandering around in search of a spot to sleep for the next few days.

A couple travelers told us about a guesthouse they had just left, and mentioned they loved their experience. It was a TripAdvisor recommended guesthouse called Baan Jaja, and staying there proved to be the best decision we made our entire time in Chiang Mai.

We were greeted by a slightly awkward, yet energetic woman named Ja and she informed us that they had a 2 bed, AC room available for 500 baht, and split two ways, it was 250 baht/night per person. The room was great, and with Thai Baht to USD is roughly 30:1 at the moment, we were paying $8/night. After paying ~1400/month in NYC, you could say it was a welcome change of pace. 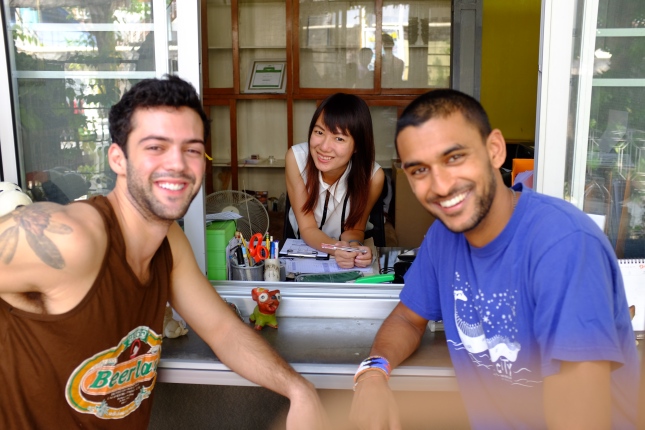 Greeted by Ja at Baan Jaja 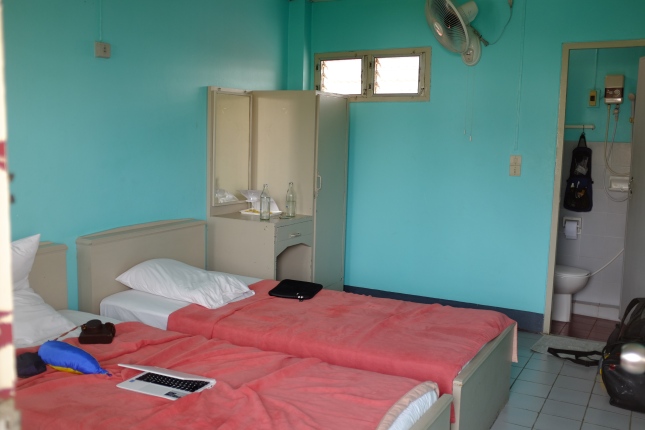 Our humble abode in Chiang Mai

We tossed our bags in the room, grabbed a dank meal, and lazed around the rest of the day. Exhausted, we grabbed a quick meal, explored the night bazaar, and called it a day. 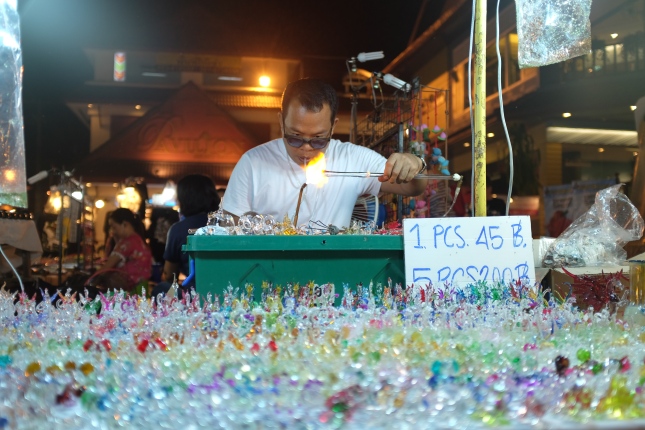 Glass Blowing at the Night Market 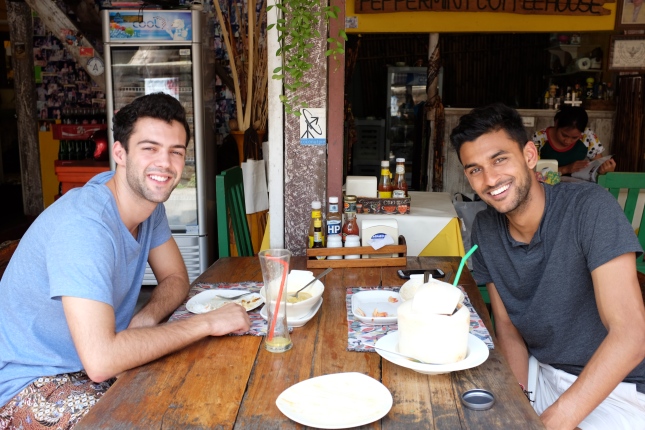 The first of many ridiculously delicious meals in Chiang Mai

After enjoying the previous day lazing around, we woke up the next morning ready to explore.  I had messaged a few friends asking for tips, and my buddy Max mentioned a secret Rock Quarry where we could go cliff jumping that sounded pretty epic, so we decided that was the move for the day. The only issue was that since it was relatively unknown, there were very few listed directions on how to get there, and the street we had to turn on had no name. Fortunately, Jason made an expert map to help us find our way.

(Ok, the back of the napkin map has gone missing for the moment so use your imagination).

Strange play at the temple we stopped at

We rented a scooter, and with our handy dandy map in hand, we took off towards the quarry. To our disbelief, despite following the detailed directions we had some trouble finding the spot. We took a pit stop at a random Wat (temple) we found on the way, and decided to give it one more shot.  We took a guess and turned on one more street, and began driving down a random backstreet. I was close to giving up until we saw an elderly white man walking his dogs down the road. I asked him if he had any idea where this place was, and he said “Keep going straight and you can’t miss it!”

The quarry was beautiful, and totally worth the wandering. 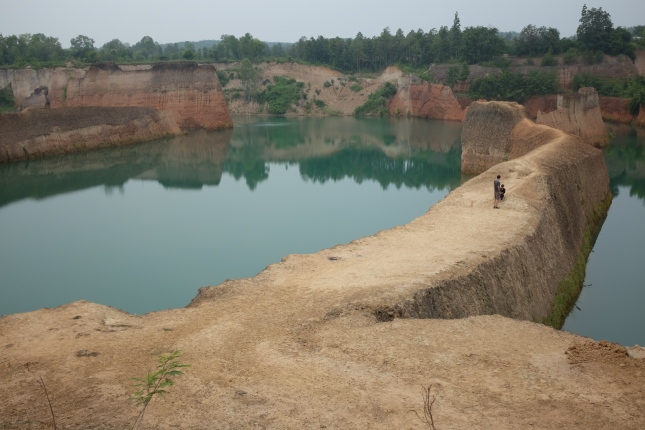 It must have been an old mining quarry, and we were the only ones there when we arrived. We walked over to the edge of the highest jumping point, and contemplated the safety/depth of the water below. It must have been at least a 50 foot drop, and aside from an epic bridge jump in Sevilla I had never jumped off anything remotely that high before. We figured it looked safe, but given the distance of the drop and the whole potential of dying thing, we weren’t looking to take any chances.

As we sat contemplating the leap of faith, two jolly British lads Toby and Scott,  appeared at the quarry. Toby waded into the water, gave the thumbs up saying we were all good to go, and so it began. The three other dudes took the leap of faith, and I was the next man up. After a few moments of skepticism, decided I couldn’t think about it any longer and ran off the rock. It was an exhilarating, yet terrifying experience, and despite my ass still being sore from the awkward landing – I couldn’t be happier I did it. 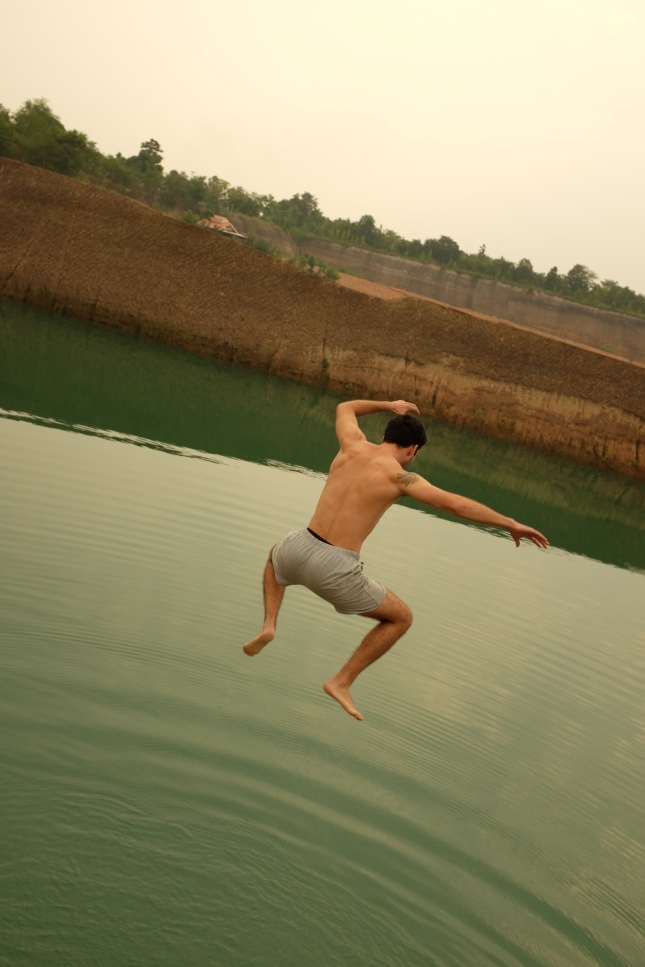 We spent the rest of the afternoon jumping off rocks and shooting the shit with our new friends, and then headed back to the place as the sun began to set. It was on this drive home that I truly began to value Google Maps and gps systems. We got back to the main city area, but after a few turns we thought were in the right direction, realized we had no idea how to get back to our soi (street). After a few frustrating attempts at reading a map on the back of a scooter, I yelled towards a biker next to us and signaled for help at a red light. I pointed at the map. he and his wife conferred, and then said follow us, and we obliged. Bobbing and weaving through traffic, the kind folks got us back to the right place, and we finally made it back to Baan Jaja.

Asia is remarkably cheap – I already knew this, but it’s so awesomely inexpensive that I felt it was worth a mention. The only thing that costs you a considerable amount is the plane ticket, but once you get here, you can live well off $20/day in the right places

You don’t always need a plan – While it can be a bit more stressful, showing up to a place without a plan can also be a lot of fun, and allows you a great deal of flexibility to explore new places, extend or decrease the length of your stay, and so much more. While there are definitely certain trips which need extensive planning, remember that it’s more than OK to figure it out as you go

People are Awesome – If those friendly folks hadn’t led us the right way to get back home, we very well may have still been driving around Chiang Mai looking for our guesthouse. People around the world are incredibly kind and helpful – and though it can be intimidating at times, it never hurts to ask for help

Just Jump – I had been scared shitless when I was standing up on the ledge, debating whether to jump or not. I had always wanted to go cliff jumping, but as I stood on the ledge it felt like the last thing in the world I wanted to do. I decided I had to just go for it, and though it felt risky, it turned out to be a ton of fun, and I would have regretted not doing it later. Though an unusual analogy, it had me thinking about other decisions in my life, and was a neat reminder me that you never know unless you just jump, so why not?

Chiang Mai is the best – That is all.

I’m attempting to catch up on blog posts now – so expect a barrage of stories and mishaps coming soon.