I’m finding that i’ve been able to be super productive without internet so far. Although i was rather frustrated at first, i’m just using the time to catch up on the blog at this point. Oh yea, i landed in Indonesia and am in Jakarta right now. Have a blog post on my first day in this colorful country coming soon!

So much happened in my lat week in malaysia that i just decided the best way to catch up on the blog would be to post a bunch of random pictures, and then fill in the details and hopefully they’ll follow some chronological order or something like that.

For lunch one day, bossman Rajiv, me, grace, and panto the kitchen manager went to a famous vegetarian restaurant in a part of town that i’d never been to before, masjid india. I was fascinated by many of the things i saw on my way to the entrance of the restaurant, so decided to walk around and take some pictures. Right after i left the restaurant, i saw some youngish looking people, and we started talking and turns out that they were AMERICANS! First Americans that i’d met my whole trip in Malaysia, and was ecsttic to have met them. They were from Cali and traveling around, so refreshing to speak with a fellow american, and got me rather excited to get back!

Food on plate, but not for long as it was in my belly shortly after this picture was taken.

After lunch, i went walking around masjid india and found a pretty sweet marketplace!

Saw this poster, and found it rather amusing but really liked the message at the same time. There are three major races that KL is composed of, Indians, Malays, and Chinese, and although they co-exist relations can be strained at times so really liked that the city was making an effort to unite the country!

On my walk home, i ran into some really friendly, adorable kids!

That night, after work i decided to get some hawker stall food for dinner. Met a great couple from Belgium, and ended up grabbing dinner with them. We had a couple beers, and after having to deal with a terribly obnoxious street guitarist, spent the evening talking about the European union and our respective lives. 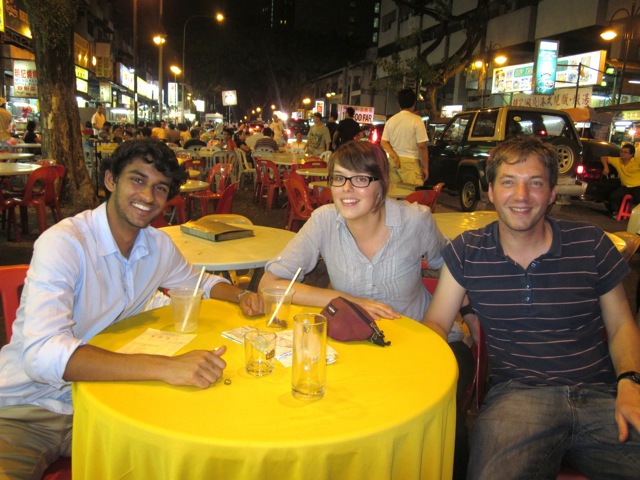 After dinner, they told me that i had to try some Mangosteen, and so we went to the vendor down the road and thomas picked some up! I was skeptical at first due to the ants crawling around the skin and the off putting color, but once you peeled back the outer shell it turned out it was delicious! 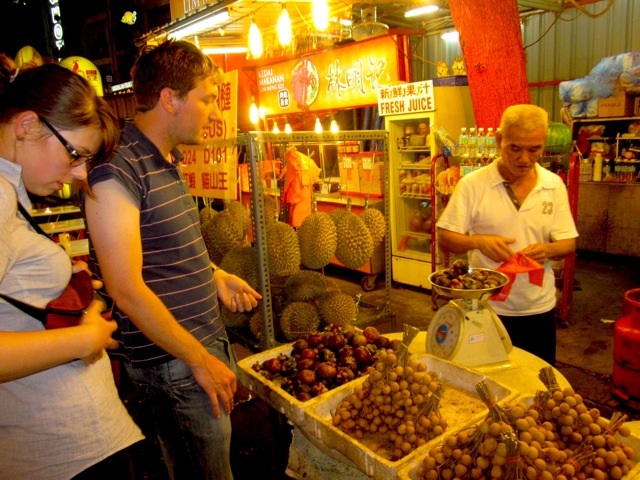 That night, i was planning on meeting up with my aussie friends. They were at karaoke, so i hopped in a cab to head over and meet them. Asian karaoke is the best! They give you and your friends a private room that you pay for, and then you can just embarrasingly belt out some hilarious tunes without worrying about what anyone thinks. Best part is they deliver drinks to your private rooms!

Things got kinda wild after a few long islands..

After karaoke, we hopped in a cab and headed down to bukit bintang! 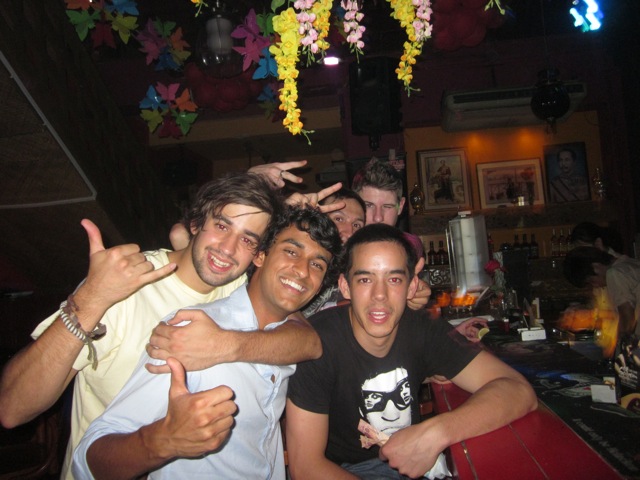 Managed to talk my way into reggae bar for free by saying that i wanted to take a picture of this. Ironically, since no one else could get in for free i actually did end up just walking in and taking a picture of this mural, and then leaving haha

The next day, my boss decided that he wanted to take me around the city and show me some of the cool places that i hadn’t had a chance to check out just yet in Kuala Lumpur.

The following are pictures of me doing the “awkward tourist pose” around Kuala Lumpur..

I want your outfit. 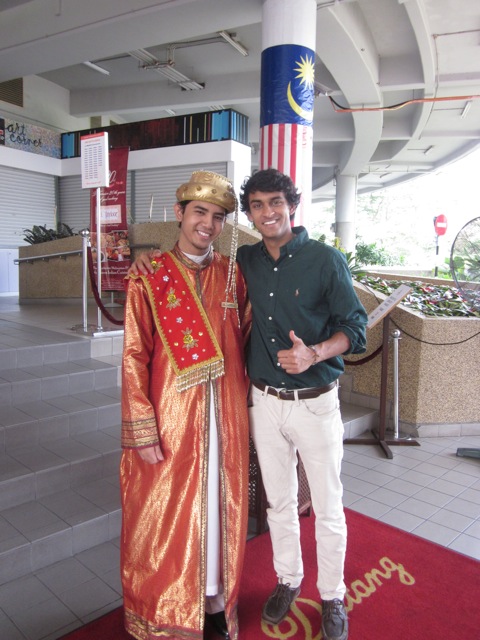 Played a sweet game of mancala on a huge set with Rajiv!

I got stuck in this giant joant joant for a while..

Played the thabla for a bit 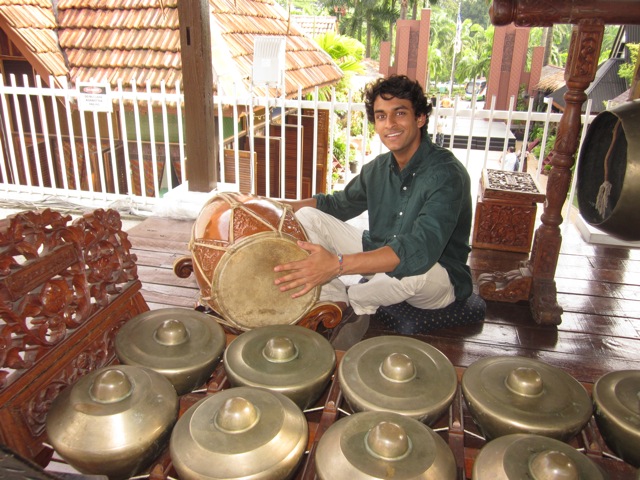 Got some dankity dank mango juice

Ran into some funny talking parrots

Headed off to the amazing national mosque for a few minutes

Even though it was closed for tourists, i managed to get inside and check out the mosque!

Afterwards, we headed to bangsar village where the old outback restaurant that just closed was located. I spent the evening wandering around the malls, and ended up at the bookstore where i’ve spent far too many hours in the last few days reading about all sorts of random, unrelated topics.

The next day, i had one of the most incredible days of my life, as i went to the oldest rainforest in the world Taman Negara! Will have a full blog post coming up next in line. Anyhow, i got back really tired and realized that the US womens world cup title game was on. Literally went running around outside for a bit at 3am trying to find a place to watch the match, as i couldn’t get it streaming.

Finally found a place cleverly named the “foodball junction” right down the road and started watching the depressing match. Was the only American there, and was defiintely annoying at the end of the game with everyone cheering.

I helped with the closing of one of the two outback locations in Malaysia at Bangsar. Learned a lot about what goes into closing a business, and was a learning experience. Even though i’d only been there for a few days, was still sad to see the place all closed down. Peacee bangsar!

That night, i went shopping and picked up some sweet traditional malaysian clothing! 2 pants, and 1 shirt for 15 bucks…gotta love asia!

Wednesday was my last day in Malaysia, as my flight to Jakarta was thursday morning at 9:50. I spent the day at Bangsar, and actually just hung out at the bookstore for hours reading as there wasn’t much for me to do left during the restaurant closing. At lunchtime, we decided to go to the amazing bananaleaf place that we went to my first week over here.

Just as the first time, it was absolutely delicious! I loved the concept soo much, and am thinking about incorporating it if i end up starting a restaurant chain in the near future. 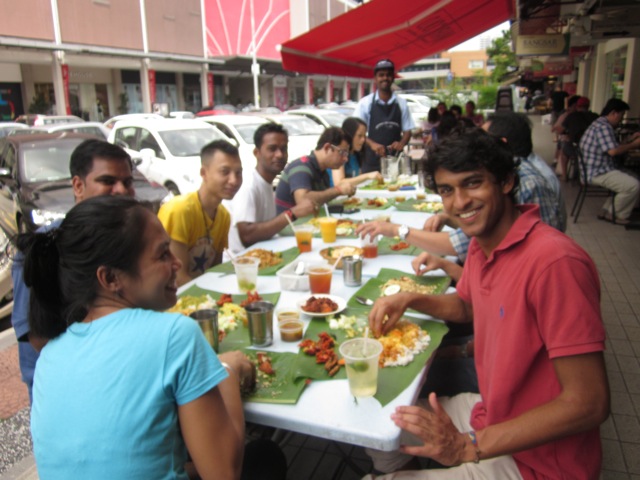 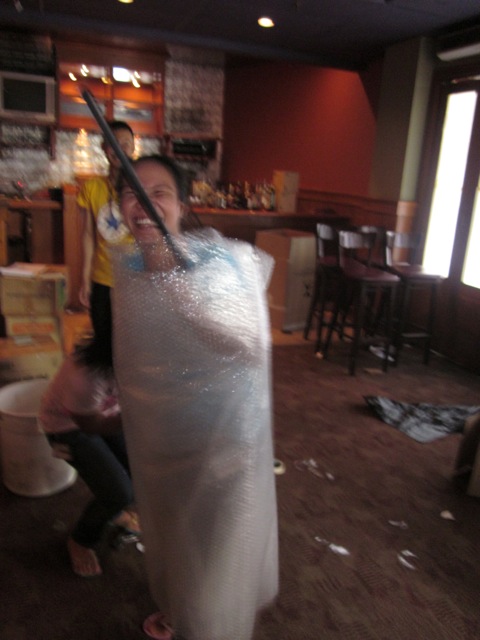 Me with the bossman

The night before, we had a press night at the BB park restaurant location. The event was organized to promote the restaurants recently launched new dinner menu, as well as the brand new lunch menu that was just rolled out, and I actually ended up presenting in front of the media for a bit to talk about the awards that the restaurant had received last year. As a result, i decided i might as well just sit down at the media table, meet some interesting people, and promote outback to writers. This cute british girl, who happened to be the writer, sat next to me and she turned out to be super interesting and we ended up talking for most of the evening, and decided to meet up the next night for dinner.

After the event, i finally met up with old family friend Neil Dave. Neil is related to Saroj auntie, and i hadn’t seen him in 11 years and actually didn’t remember meeting him in the first place so felt like i was sort of going on a blind date with a guy to some extent; but we had been fbook messaging one another and mom wanted to meet up so i said why not. Turned out to be a GREAT decision, as neil and i hit it off immediately. Crazy that even though we live on opposite sides of the world, we were able to connect instantly and had so many similar interests and ideas. Spent the evening talking about our lives, passions, and goals and downed 5 or 6 beers at various locations. All in all, super glad we met up and hope to keep in touch with him in the future!

Anyways, the next day i met up with the british girl and we went to a nice indian restaurant in Bangsar, even though i was still stuffed from the banana leaf meal haha. She was a super interesting, intelligent person who was aspiring to be a novelist some day! Was great talking about our travels, and seemed that we shared similar ideology on most things. Definitely going to use her story to convince people that they can travel the world and do what you want to do, as she just decided one day that she wanted to move to Kuala Lumpur, and she did it. She ended up finding a job she loved as a journalist, and spent a year here and is about to move to Thailand and do it all over again. Make your own luck!

All in all, Malaysia was an absolutely amazing trip, and think i continued to learn soo so much about the world and myself. Would highly recommend traveling alone at least once in your lifetime, as you are forced to get to know yourself so much better than you did before, and meet so many interesting people. Although i was in Malaysia, i feel like i gained so much knowledge about the british, Australians, and New Zealanders all because i was forced to go out of my comfort zone and approach random people.

If you have the chance, you should definitely visit malaysia as it is an amazing, often overlooked country that has some incredible things to see, do and experience!

One thought on “Malaysian Madness – Pt.2”