One evening while at work at Outback, i met a wonderful mother/daughter table from New Zealand. They were from christ church, the city that was rocked by the earthquakes in New Zealand, and we started talking and i ended up hanging out with them for nearly 2 hours that night…probably not the best decision being that it was one of my first days at work but they were super interesting so i went along with it. Turns out, Christ church has had 7500, yes 7,500 Aftershocks in the year following the earthquake which took place on boxing day (Day after xmas).

They mentioned that they were planning a trip to an elephant sanctuary, and being that elefantes are my favorite animal my ears instantly perked up. They told me their hotel concierge gave them the info, so went to check it out after work. I pretended i was staying at the federal hotel, and had the concierge give me all the details.

The tour was leaving the next morning at 9am, so even though it was only my second day of work i had to call my bos and ask if i could move my day off work up so i could go play with some elephants! Fortunately he agreed, and i couldn’t wait for promised to be an epic experience.

The next morning, i got all my shit together and headed off to the federal hotel to catch the bus to the sanctuary at 9am. Felt that it was only fitting that i be wearing my elephant boxers to the sanctuary.

Grabbed a 66 cent breakfast from the shop across the street from my old hotel, was delicious! Also, steadily improving at using chopsticks…figure that being in Asia i should come back having at least basic proficiency in that skill haha

Hopped on the bus, and we were off! I was riding solo, like usual, so was intrigued to see who i would meet on this adventure.

We stopped at a couple places on our way to the sanctuary. The first was an awesome spot where a lady was hand painting these incredible designs on a cloth. 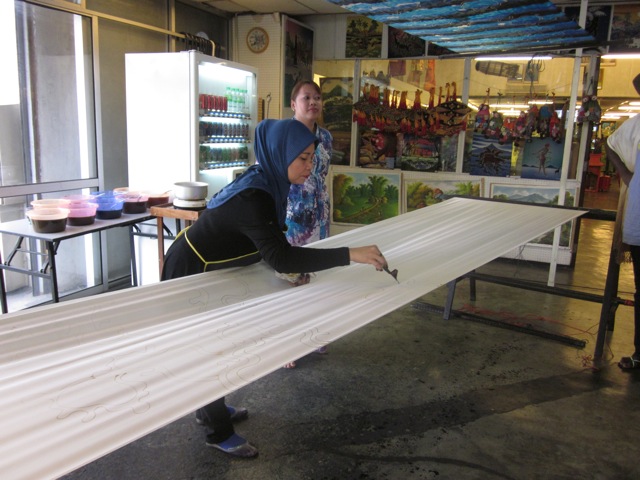 She did this in less than 10 minutes!

The next stop was a bathroom break, and i went around through the markets just checking some stuff out.

Found some toy guns i had to play with

Met an awesome lady and her daughter, and she even offered to give me a free drink because she liked me. I was so taken aback by this gesture that i paid her 5x the actual price of the drink (a miniscule total of$1.66) and she couldn’t have been more ecstatic and gracious. It was so crazy to think that such a little amount of money literally made that womans day, and was such a huge deal in her life. Really makes you appreciate all that we are blessed with, and i would have paid 10x that amount just to see such a genuine expression of happiness from such a wonderful person 🙂

We drove a few feet down the road to grab a local meal at some chinese style restaurant. 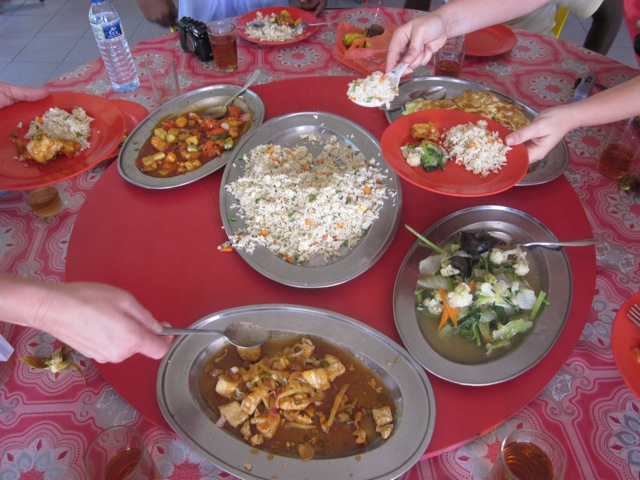 After lunch, we finally made it to the elephant sanctuary!

Our goofy, and super interesting tourguide was laying all sorts of interesting elephant facts on us all day. Apparently he lived in the jungle for 6 months to study elephants…wtf haha. After a quick video in regards to how they actually bring the elephants to the sanctuary from the jungle that left me with mixed feelings, we went to the elephants stomping ground.

Tourguide with a fresh Malaysian shirt

The first baby elephant came out, and then the flood gates were opened! Everyone started feeding this guy peanuts which was cool to see

All the trainers came out riding different elephants, and took them into the water to bathe them. Was soo cool watching the elephants play in the water, and even cooler watching the guys working there just hanging out with them and giving them baths…potentially the best job ever haha

They brought them back to the main feeding area, and started hosing them down a bit more to wash off some of the muddy water.

This guy was loving it!

That super tight elefante crew all lined up

They brought out a bunch of buckets of fruit, and so we all grabbed some and started feeding the elphants!

…Naturally, i had to bring the toes with me ^

Was so craazy having the elephant eat out of your hands, as they just sucked the fruit right up and it almost felt like they were gonna take your hand up with it! 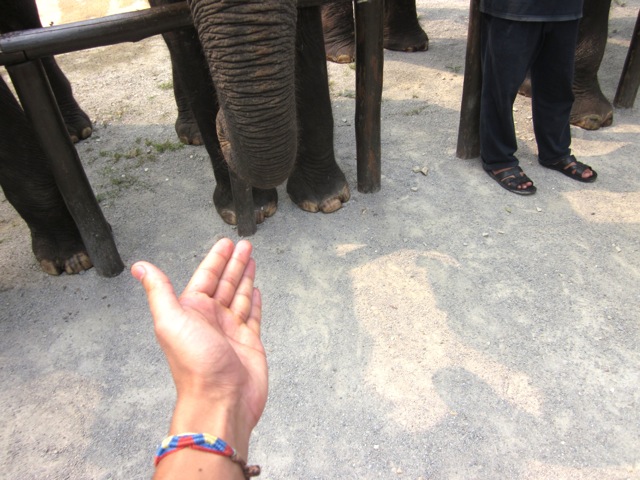 During the feeding session, i met some awesome australian kids who were traveling around. We started talking and ended up hanging out for the rest of the afternoon. Sadly, the only reason that they had heard of the staet of maryland was because the punk rock band good charlotte was from there haha. Turned out those kids ended up being my best friends over in kuala lumpur, and was so happy to have met them!

With my new aussie buds a few days later!

Anyways, Hanging with one of the elephants..

After feeding the elephants, we all climbed on to the elephant riding platform and took our respective turns riding the elephants. Was an awesome experience, and only reinforced my belief that elephants are just the tightest animal. Definitely trying to ride one if i end up doing the whole indian wedding thing. Also, i’m thinking riding through the jungle on an elephant would be the coolest thing ever.. 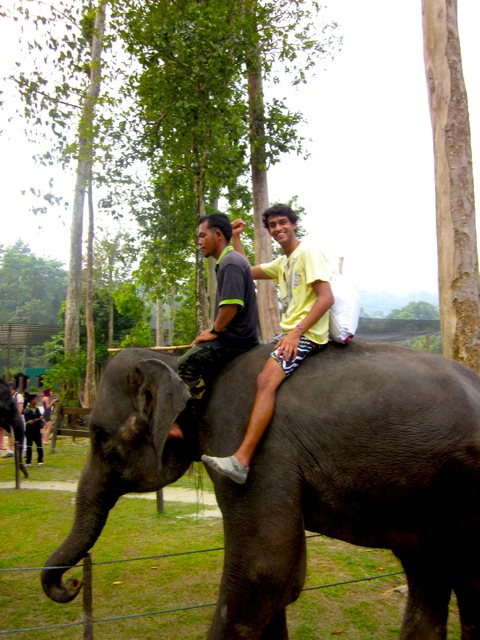 Afterwards, they brought a few elephants into the water, and everyone hopped in and started playing with them! So glad i brought and bought my waterproof video camera, as it allowed me to take a bunch of footage in the water! It was pretty funny when you got in the water, as the trainers told you to hop on the elephant while it was sitting down. All of a sudden, he would shout “1,2,…3!” and then out of nowhere he started splashing you with water and joyfully yelling, and then the other 30 people joined in making for one rather amusing, strange experience.

All in all, it was one of the coolest experiences of my life. Was the second time i’ve ridden an elephant, and being able to go in the water with and feed them was pretty unforgettable. Would highly recommend riding one at some point, as iit’s wayy cooler than riding a horse haha