This post’s nearly 2 weeks overdue, and i actually wrote it a while back but for whatever reason got lazy and never quite finished it. Regardless, It’s a semi-long, relatively unimportant post about my super long day of travel as i finally made it over to my current residence over here in Kuala Lumpur, Malaysia.

To be quite honest, i’m rather sick of discount airlines and their ridiculous policies when it comes to baggage. I’m also pretty over Asian airports in general, aside from the Singapore one which is world class.

I hopped in a cab around 7am for the airport, and said goodbye to my hotel room that had served as my temporary home during the past couple weeks. Once i got to the airport, as i had expected I unfortunately couldn’t check my second bag in. My second, smaller bag was about 13kg, and needed to be 7kg. As a result, i had to stuff an extra 6 kg’s of shit into my already huge suitcase. This resulted in my big suitcase being 30 kg…good thing the limit was 20kg’s!…
Even better was that it was 15 USD per kg over, soo was quickly adding up. I managed to convince them to only charge me for 5kg’s over, and figured i was done with it. As i’ve quickly learned in asian airports, you’re never done with anything.

As it was nearly a 75 dollar bill that i had to pay for the extra baggage weight, i naturally handed her my credit card. It was 3750 in Pesos, and i never carried close to that amount around with me, as it is just not a prudent decision with so many pickpockets, etc in the area. As my luck has been in Asian airports, turns out that they don’t accept credit cards!

I was extremely frustrated at this point, and was about to flip out but being that i was in the Philippines by myself i thought better of it. I walked around lugging my ridiculously heavy backpack around while searching for an ATM and finally found one, which was a huge sigh of relief. If i hadn’t found it, i wouldn’t have been able to bring one of my bags with me on the flight! …Therefore, it was a great thing the only atm on the floor was broken…

A Jetstar (Airline i was flying) employee noticing my frustration and the situation led me downstairs to another set of atms. I tried one more and it didn’t work, and i was on the verge of giving up momentarily. I tried the next atm, with little expectation of it actually working, but miraculously it accepted my card and i was able to finally check in my bag.

I only took out 4000 pesos to pay for the bags, as i didn’t want lots of excess money in pesos. This turned around to bite me in the ass, as the airport has some mystery service fee of 750 pesos you must pay to enter security which was absolutely ridiculous. As a result, i was thrown into disarray once more and had to go digging through my bag to find some singapore dollars, which i converted to pesos and finally was able to get through security with my bag checked in and on their way to Singapore. To say i was happy to be through security and sit down at the gate would be an understatement haha.

In what had proved to be a rare occurrence in Manila, the sun was shining as the flight was taking off, and i was happy to be headed to Singapore!

Singapore for a second: again

My flight landed in Singapore, and i had about 5 hours to kill before i boarded my next flight to my final destination of kuala lumpur. As mentioned earlier, i carried on my troublesome bag, and so decided that i would be done with it during my travels. I was going to go to the Outback in Singapore, and leave it there till I came back here Aug. 3rd – 8th and pick it up again.

I needed to grab a cab to get to the outback, and for some reason there was a 10 minute quene to get a cab. I grabbed some food, and it worked out great as i ended up with an executive limo cab, which was a really nice mercedes sedan.
My executive limo taxi 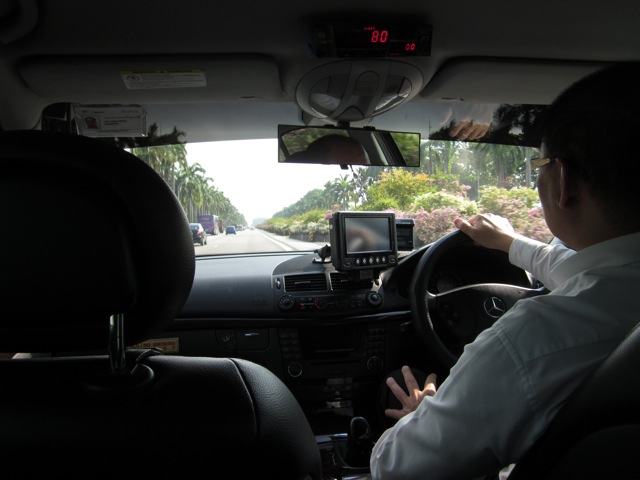 After dropping off my bags, i met up with my bosses at the companies headquarters and got updated instructions on my tasks for Malaysia and then headed back to the airport.

Went to the Hugo Boss store to kill some time and tried on some clothes that cost the same as my 2 month stipend haha…one day. 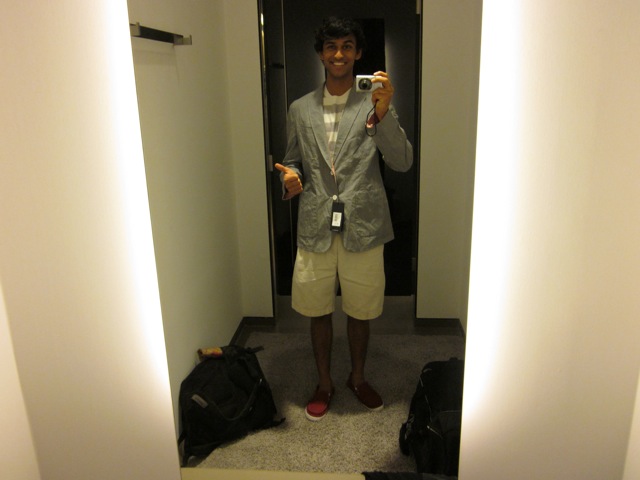 While waiting for my plane at the gate, I made friends with an awesome British girl who was around my age and heading to KL as well. We hit it off right away, and ended up sitting next to each other on the plane and had a great time. The ride flew by (Pun intended) and was lost in conversation the whole time.
It was pretty entertaining making fun of one another’s accents and cultures, and despite the fact that we were both speaking english it was funny how many times we had to ask each other to repeat words and sentences. Was great to see that despite the fact we are both from different countries and backgrounds, we had so much in common and were able to connect right away.

Also, i’m a sucker for british accents…too bad she has a boyfriend haha. The good news was that i had made a friend who would be in KL before i had even landed there, so we met up later on in the week!

Met up with kate and her bud Wes in KL! 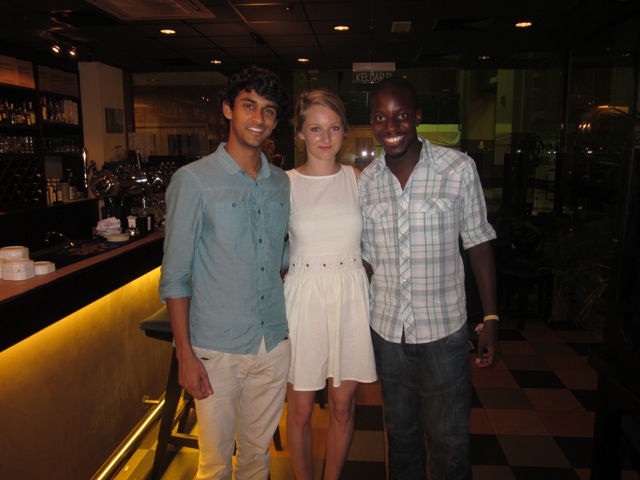 Anyhow our plane finally landed in KL, and after aimlessly wandering around the airport with kate for a while and waiting at the wrong baggage claim, we finally made it out of the airport.

First sign i saw outside the airport, they weren’t kidding. KL has truly provided me a flavorful taste of asia!

I actually had no idea what i was supposed to do after getting off the plane, beyond being told to go to central station and someone will be waiting for you there (with a picture of the guy attached). Finally figured out where the bus to central station was, and turned out it was an hour+ ride. Finally got there, and saw a man with searching eyes matching my own who turned out to be my ride and the managing partner of Outback Malaysia.

The parking machine was broken, so took him 20 minutes to figure out how to get out of the garage but we finally headed off to my hotel.

The name of the neighborhood i’m living in is Bukit Bintang. It is pretty much the most happening spot in KL, and has a very active nightlife on the weekends. I’m really glad to be living here as there are tons of tourists out and about who i’ve been able to meet and spend time with. 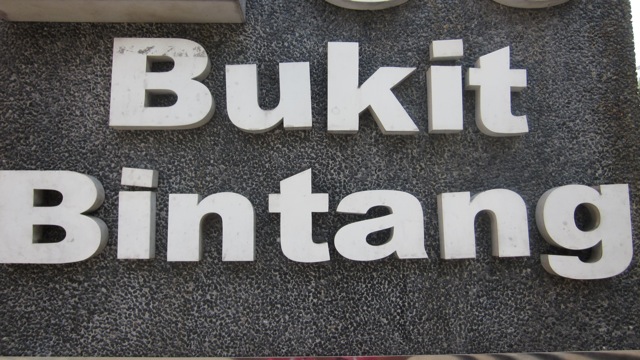 I’m staying in a small colorful hotel called YY38. Strange name, i know. So strange, that i felt inclined to ask, and the reasoningwas pretty profound. The owner of the hotel owns a company called YY, and the lot number was 38, and so the YY38 hotel was born haha.

Naturally, had to put my tapestry and NO8DO flag up to make my temporary residence feel like home!

They both fell down, and may have ripped off some wall paint…

Other side of the room. Have a great tv that gets an incredible 6 channels 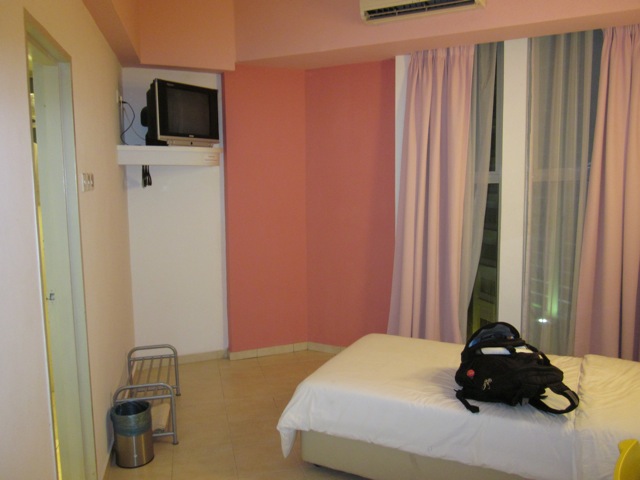 I’m on the fourth floor and so this is the view from my room. 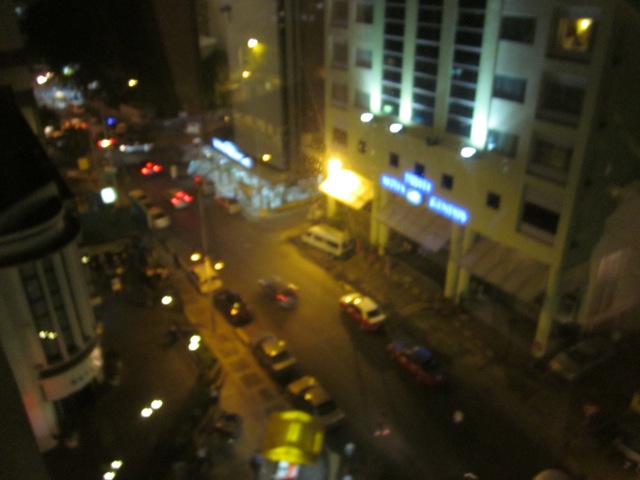 Despite the relatively uncomfortable bed, and occasional ant or two that seem to enjoy crawling on aforementioned bed, i’ve really enjoyed staying here and the staff has been great.

Malaysia has been an awesome, awesome trip so far and i will be sure to put up a few posts in the next couple days about all the unusual things i’ve been doing over here.

Missing everyone back home, and hope you’re all doing well. Get on skype so i can see your faces!