Honestly can’t believe it’s only been a week since I left the US. Hong Kong feels like forever ago! Every day has been an adventure, and in the short span of just a week, I’ve learned and seen so many interesting new things. I’m definitely missing everyone a bunch already as I’m over here by myself, but getting to know some really interesting Filipino’s at work and been having a blast with them.

I’m literally working from 10am to 10pm everyday, so apologies for not being able to keep up with the blog and with everyone over the past week. I get home with every intention of writing stuff, and then just end up passing out from exhaustion, but have learnt a bunch of cool things and about Filipino culture in just the past couple days!

Also, now that I have somewhat of a set schedule I’ve figured out when I can skype with people! Should be online after work, from around 10-12am America time, and also in the morning when I get up for a bit form around 8-9:15 PM US time so let me see your beautiful faces please. I’ve also recently taken a liking to twitter in the past week or so, as it allows me to write down the million and one thoughts that have been floating through my head in the past week. Not quite sure how the whole # thing and all works yet, but you can look at that if you want to hear some random thoughts about the Philippines and my new asian life!

Took a bunch of video footage in hong kong, so whenever I get a chance I’ll try and throw a video together about my trip. Since I keep falling behind in the uphill, losing battle that has been writing this damn thing, the posts will probably be a little bit shorter and less detailed as I try to stay somewhat on top of it.

Hong kong was absolutely gorgeous, and an amazing, fun experience! It was the first time i had ever traveled abroad solo, and i met some great people and learned a great deal about the city and myself! I was only in the city for a couple days, but am happy to say i think i made the most of my time there.

Here is a description of my trip there through pictures:

After my ridiculously long 15 hour flight from O’hare, i finally arrived in Hong Kong! I took an airport bus to get from the airport to my hostel, i was staying at an affordable place called the Yesinn. 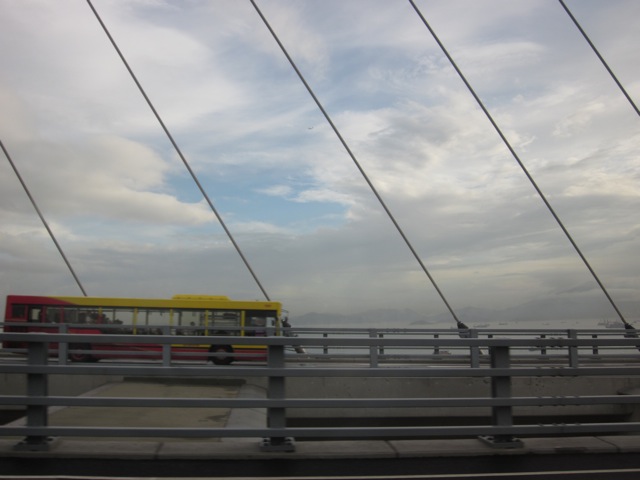 Happened to be sitting next to some newlyweds from Mainland, China who were celebrating their honeymoon in Hong Kong!

After my long day of travel (Over 20 hours total) i finally arrived in my hostel. I was too tired to go out on the town or explore the city, so decided to just grab dinner and call it a night so i could be well rested for the next morning. I met a cool dude named Jeff, who was working with Samsung, and visiting HK after a Samsung employee celebration event in Seoul. We grabbed dinner at this local restaurant down the road!

I had delicious chicken curry for dinner! 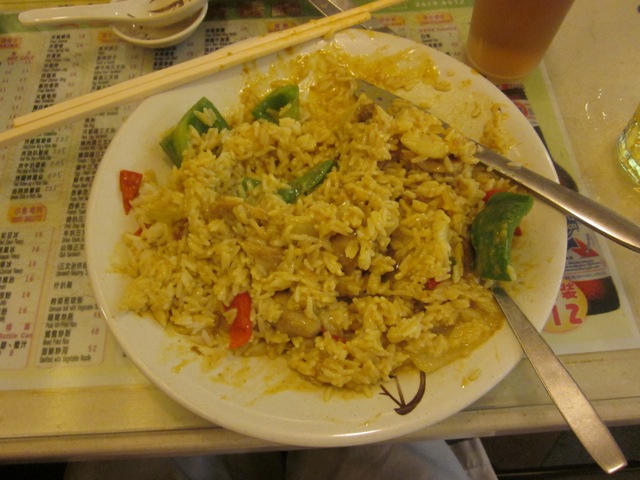 On my first day in Hong Kong, i woke up with a ridiculous amount of things i wanted to see, and not nearly enough time. I only had all day friday, and then the afternoon saturday, so i prioritized what i really wanted to see in the city and set off to explore the island!

Started the day off by grabbing some breakfast with jeff at the local bakery. 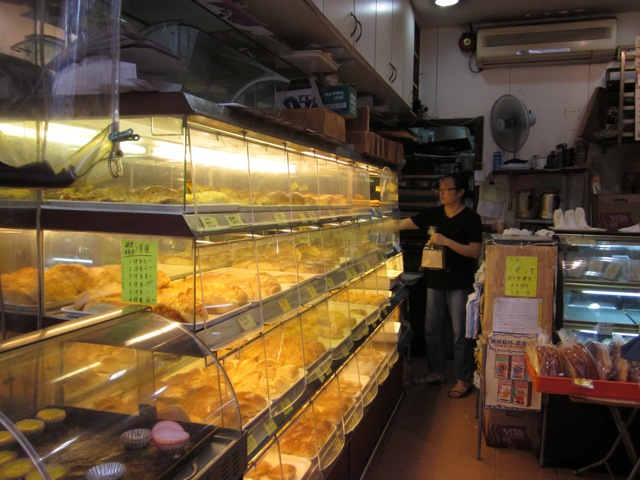 Bought an all day metro pass, and felt like i rode the metro a million times in the short 2 day span. 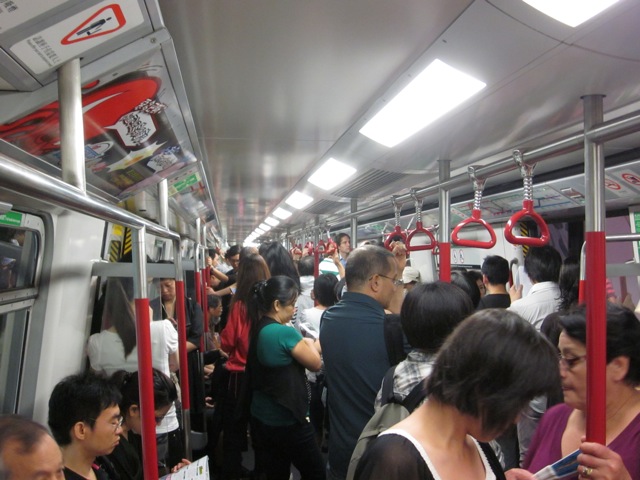 Jeff and i decided to visit one of HK’s main attractions that morning, Victoria’s peak!

On the way up to the top of the mountain on the Victoria Peak Tram!

Couldn’t believe i was there!

Felt like i was at the end of the world, or on some sort of crazy movie set

We took this really cheap bus back down to the city.

Jeff and i split up, and i set off to explore the city!

Saw an H&M, naturally i had to stop by and check it out. Was surprised to see that they had the exact same offerings as the US and Spain, and the prices were actually comparable as well. 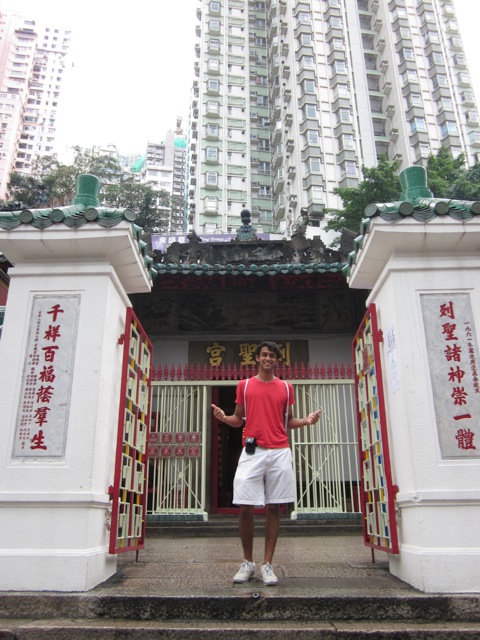 Went to the Hong Kong Zoological and Botanical gardens in central! 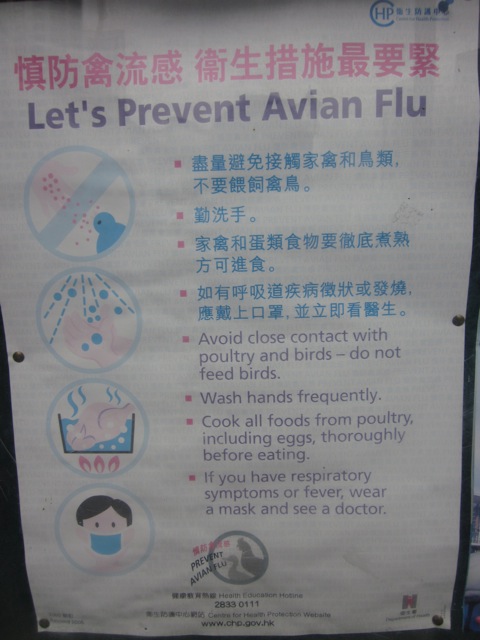 Random group of 5 Filipino women stopped me and asked if i would take their picture. One proceeded to ask if she could take a picture with me haha 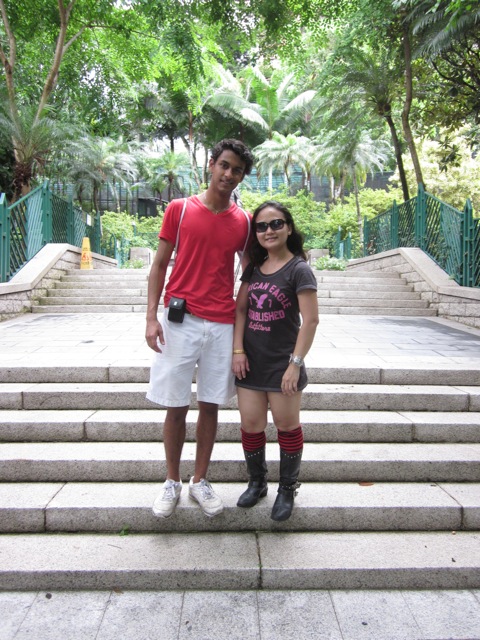 Sweet looking birds, they had flamingos there too!

Found some tai chi wheels and played with them. Must have looked a bit crazy spinning those things by myself haha 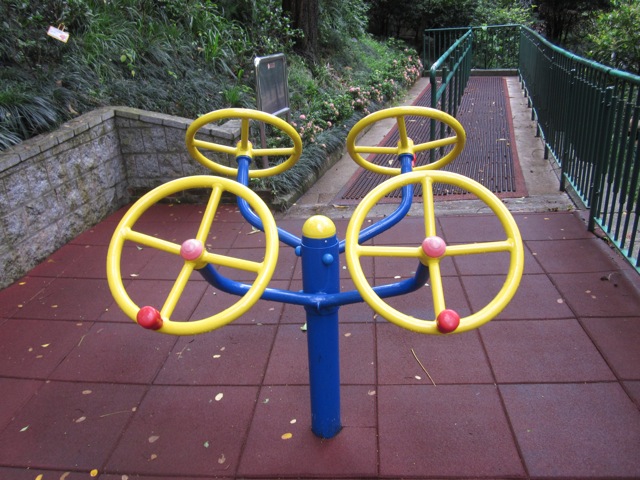 Craziest monkey i’ve ever seen, he was swinging all around the cage with baby in hand for forever. Awesome to watch. 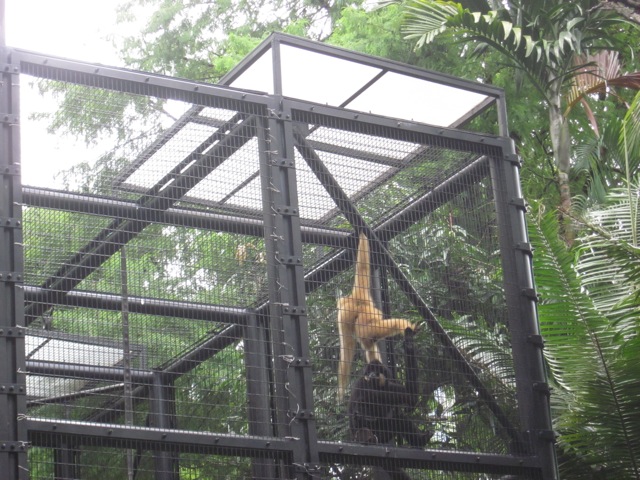 After i had finished up exploring the Gardens, i decided that i wanted to head off to Hong Kong Park, as i had heard good things about it. Unfortunately, i was so far into the gardens that i had no idea where i was or how to get back to the main entrance so i got out at the first exit i could find. After getting out at the exit, i legit had no idea where i was. I walked around for a bit, till i decided i was completely lost. I asked this friendly 60 year or so old lady, and she was like “Oh, that’s so far away!”. I was blown, as i had been real close to them earlier. As we were speaking, she flagged down a cab, said she would take me there and instructed me to get in so i did and went on a wild ride with this cool old lady. Had no idea where this lady or the cabbie were taking me as they were speaking in Cantonese, so i jumped out at the first spot i recognized in fear of getting lost in the middle of HK. She was well intentioned, and i was appreciative for the free cab ride and friendly sentiment. As a generalization, everyone i met in China was extremely friendly, and HK gave me a positive impression of the Chinese!

Finally arrived in HK Park, and went to this amazing Aviary! 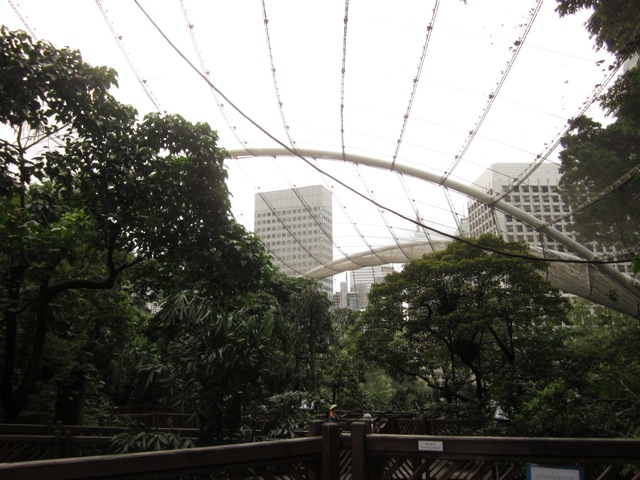 There were birds flying around all over the place, and thought some of them were going to take off my head based on how close they would fly next to you. Bird eating fruit below.

At this point, i had been walking around for about 7 hours straight, so decided to go back to the hostel for a quick nap to recharge my batteries for the evening. After struggling to get back up after my nap, i headed off to the Temple Street Market which i had heard so much about. It was a traditional crazy market, where you could get pretty much anything you wanted for super cheap. To my surprise and dissapointment, they weren’t nearly as willing to negotiate as what i had seen in other markets around the world.

Was doing my best to do HK on the cheap, and to that end grabbed a McChicken at mickie D’s for dinner haha. They are literally in every single country, ever.

After dinner, i hopped on the metro and headed off for the Avenue of the stars to see the beautiful HK skyline at night for a second!

After that, i hopped back on to the MTR and went to Lan Kwai Fong! Every person i had talked to about HK told me that i had to go check out the wild night life scene there, and despite the fact that i was flying solo i figured it would be an interesting site to see and check out. After awkwardly meandering around with a tsinga in hand for a while, I managed to meet some cool girls from Delaware and hung out with them for a majority of the evening. We bar hopped for a bit, and then went to a Hard Rock cafe where listened to a terrible music and i paid far too much for a mediocre rum and coke. It was my first time ever going out Solo, and although it was pretty strange at first i’m really glad i did as i got to see the HK nightlife at it’s best!

That friday was one of the craziest of my life, and don’t think i’ve ever walked around that much ever before.

The next day, my friend Joeri from Amsterdam, who i had met in the hostel and i decided to check out the Tsim Sha Tsui area and the dragon boat carnival! We grabbed lunch at a chinese place, and then went to see the races!

By the Victoria Harbour! 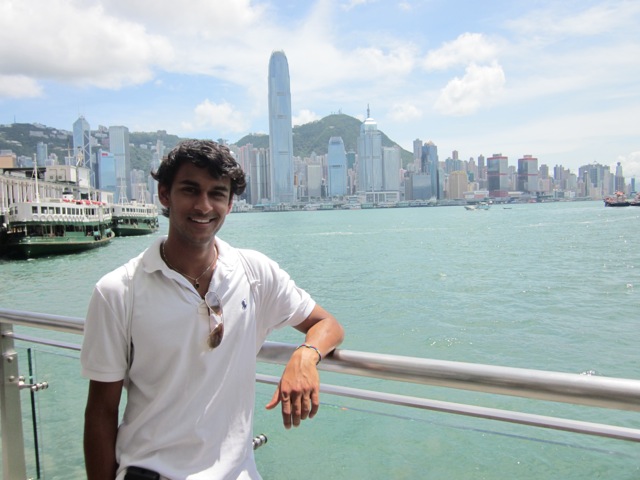 I was fortunate enough to be in HK during the Dragon Boat Carnival, which is an annual festival held in the summer time in which teams from around the world compete in dragon boat races on the harbour! It is a huge event locally, and one of the cooler things i’ve ever had a chance to be a part of. On top of that, we had perfect weather on our last day! 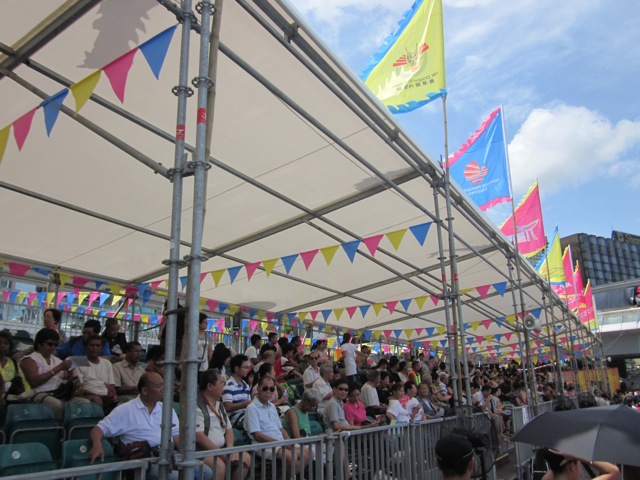 Decided to enter the races, and won first place! Like Rory McIlroy, i beat the competition so badly that they decided to not even show up to the trophy stand out of embarrassment.. 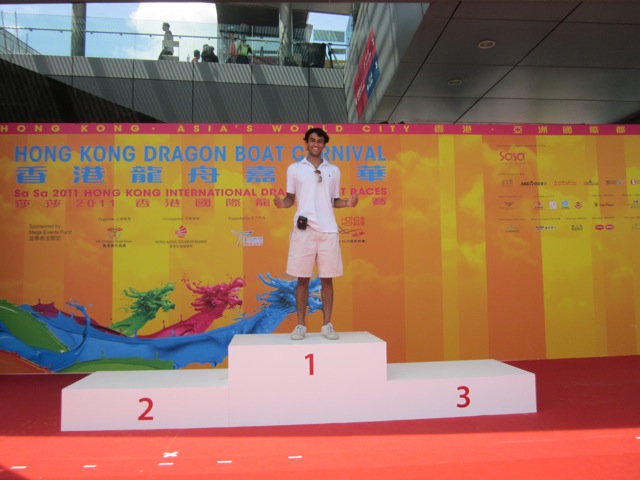 The race is on!

Joeri and I grabbed some local brews at the beer garden set up for the event, and had an awesome afternoon together. I was glad to have a friend to explore with on my last day, and was pleasantly surprised to see how two people from such different backgrounds could hit it off so quickly, and relate to each other on so many different levels despite our geographical differences.

Took the Star Ferry back over to Hong Kong Island, as i had an 8pm flight to catch so needed to grab my bags from the hostel. The ferry crossed the harbour, was incrdibly cheap, and provided some fantastic views of the skyline!

Onboard the star ferry 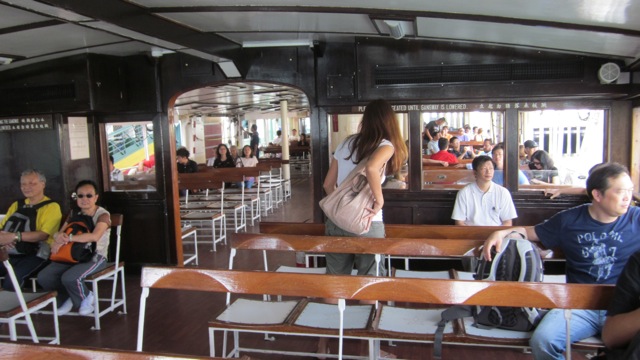 I picked up my bags from the Yesinn, and hopped on the airport bus to go back to the airport to catch my flight to Singapore that evening. The airport buses were super nice, cheap, and even had free wi-fi on them! When i got to the airport, i was amused to see that there was a line of what must have been 50 Africans (male and female), with at least 4 GIANT sketchy looking bags each. Naturally, i had to inquire what was going on and they said they were taking things to Ethiopia (god know’s what) and they wouldn’t specify what it was when i probed further. Was a really funny site to see, and in hindsight wish i had snapped a pic of it. I boarded my plane, and took off for Singapore to begin my internship in Southeast Asia!

Hong kong was an incredible city, and an unforgettable experience. It was the first time i have ever traveled to a foreign country by myself, and i had a fantastic experience. Hong Kong is a beautiful, bustling city and if you ever have the opportunity to visit, i would recommend doing so!