Right after the feria fun had concluded, we all took an absolutely amazing trip to Lagos, Portugal for the may 6th – 8th weekend which was quite possibly the best weekend of my life. I wrote about that trip in a previous blog post, which got me a bit out of chronological order.

Our last week in Sevilla was one of the wildest, most entertaining, fun, and saddest weeks of my life all at the same time. As much as we all hated to admit it, we were quickly being forced to deal wit the reality that our time in this fairytale wonderland that we had been living in was rapidly approaching an end. With the same token, we wanted to make sure that we had the most incredible last few days that we possibly could, making for an interesting contrast of excitement and overwhelming emotion.

Despite the fact that everyone had exams all week, no one seemed to bother about them even one bit and I can proudly say that as a program we did that last week and even the one before that right. We had been on an insane partying binge leading up to the week, as everything had started to become the “second to last time we’ll ever go out on this night!..” but we soldiered on and continued on with the feverish pace of celebration that had come to consume our lives.

The next series of posts will be all about the madness that was our last week.

This link should tell you all you need to know:

Our final week began on a Thursday, and what a wild Thursday it was. The university we had been studying at, La Universidad Pablo de Olavide, was throwing a school sponsored boat cruise for all of the study abroad students. Naturally, as with nearly all events we partook in, our program met up at the Torre del Oro for some nice pre-boat trip mingling and drinking.

We all boarded the boat, and managed to sneak a few of our friends from other programs on to the boat with us. The boat was two stories, and the boat tour of the Guadalquivir itself was rather boring, as they were just telling us about historical facts in regards to the river that very few were eager to listen to. With that said, we made sure that the boat cruise was quite a memorable one.

Bottom Floor: Me, Justin and Kara! 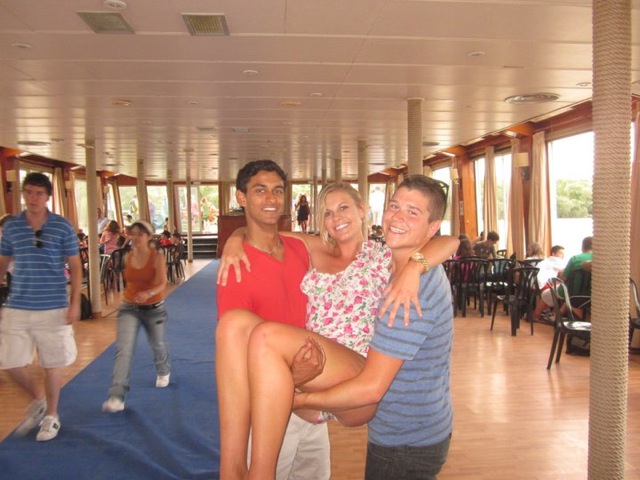 Lucas and I looking fresh

Lizzie and I doing our romantic titanic pose

I was on the downstairs portion of the boat when I heard that my buddy Justin was thinking about jumping off the boat. Justin was one of my best friends studying abroad, and is an absolute party. He had jumped off the triana brige before, and so when I heard this I was pretty sure that he was about to jump off, I was certain that it was legitimate possibility. I ran upstairs as fast as I could and found Justin and asked him if he was doing it. He said “Do you want to” and I said “Sure”. Ollie was in on the madness as well, so without thinking we stepped on to the ledge of the boat, ripped off shirts and after counting down from 5 we leapt into the filthy Guadaliquivir river that we’ve come to know as home without a second thought.

Ledge we jumped off 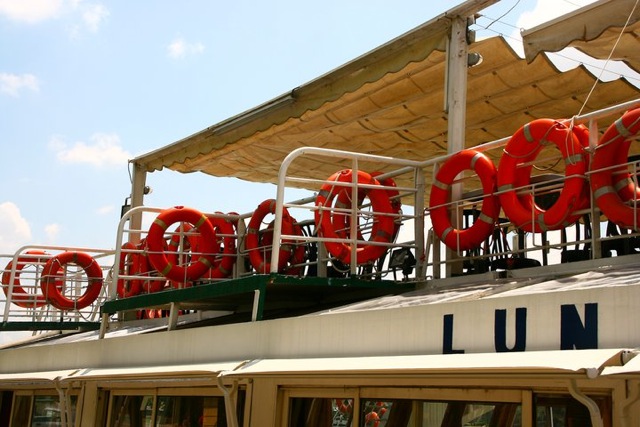 Jumping off the boat!

The jump wasn’t as far as I had imagined, well actually I hadn’t even thought about it as we just did it, and was one of the most exhilarating, empowering things that I’ve ever done. We could hear the entire boat of students yelling and cheering for us as we swam to the shore, and not going to lie felt pretty badass in the moment. After exchanging what must have been a million high fives between our crew of Conquistadors (Justin, Ollie, and I) we proceeded to walk nearly a mile barefoot, shirtless, and soaking wet on our way back home. 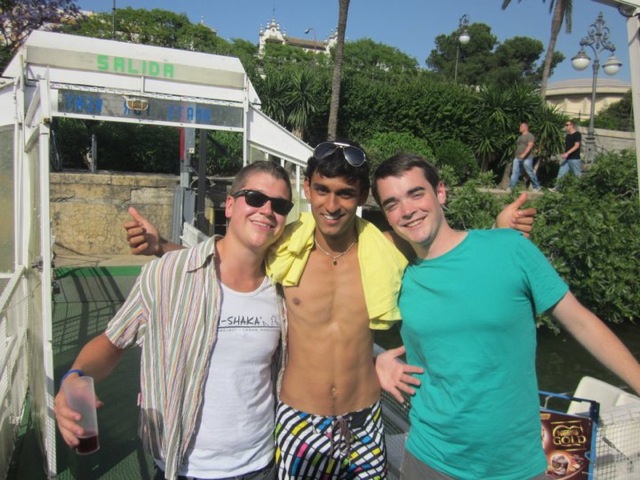 Apparently the boat director for the program at the time was a pretty Spanish girl named Miriam who was none too pleased with our antics in the afternoon. Being one of the only brown study abroad students, it wasn’t too difficult for her to figure out that it was me jumping off the boat, and began a manhunt for me that evening. As it was a Thursday night, she literally came to botellon where we pre-game, and then even out to the nightclub, Buddha, where we spent far too many sloppy Thursday nights. Regardless, the night turned out great like usual and we all had a blast.