I am super super far behind on the blog, but am doing my best to catch up. Wrote this on my incredibly long 15 hour flight to Hong Kong in an effort to catch up, with a Chinese butthead sitting in front of me who reclined his seat as far back as he could, making it extremely difficult to write this. Landed in HK last night, and am about to go off exploring the city today!

Anyway, in this post I’m going to recap the week after we got back from our Eurotrip, in which we went to a bullfight and our good buddy Shane came to visit us in Sevilla!

Back home to Sevilla!

After our ridiculous Eurotrip, Sean, Ollie and I finally made it back home to Sunny Sevilla on Monday, April 25th. I spent the entire day sleeping and recovering from the madness which had taken place during the past 10 days. Was great to get back home to Momma and eat some home cooked, and more importantly FREE meals.

Monday was actually one of the two days a week that we unfortunately had to go to school, but we had been so sleep and rest deprived on our trip, I literally passed out all day on Monday and didn’t do a thing.

I had decided earlier on that I wanted to take a personal week, so I took off class on Wednesday as well. As a result, I basically was able to extend my 11 day eurotrip adventure into a 24 day spring break, as we didn’t have classes the next week due to the upcoming Feria festivities.

That Tuesday evening was a blast, as our program to take us to a bullfight, which was something I had been looking forward to since the start of our program. Whenever I had thought about Spain before coming abroad, bullfights was always something that I had pictured in my mind, and was ecstatic to actually be able to experience one.

We all met up at the torre del oro like usual, and then headed over to the bullfighting ring (Plaza de toros). We received our tickets from our program directors, which were a staggering 89 euros a piece, and headed on into the stadium. 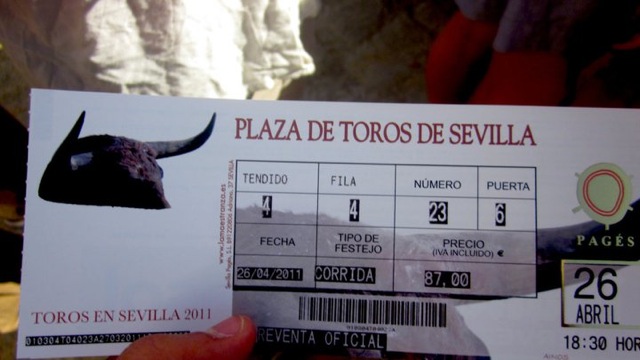 It was a beautiful venue, and was about 60% full for one of the first bullfights of the year. It was common for men to buy cigars before the fights and light them in the stadium, so as part of immersing ourselves in the culture we naturally decided to light up a few stogies ourselves.

It was a very interesting spectacle, as I felt like this was the Spanish equivalent of Americans going to watch a baseball game, albeit a much more violent and dangerous game. The bull comes out, and goes through a difficult to watch portion in which the bull is weakened throughout the fight by various knives and spears. 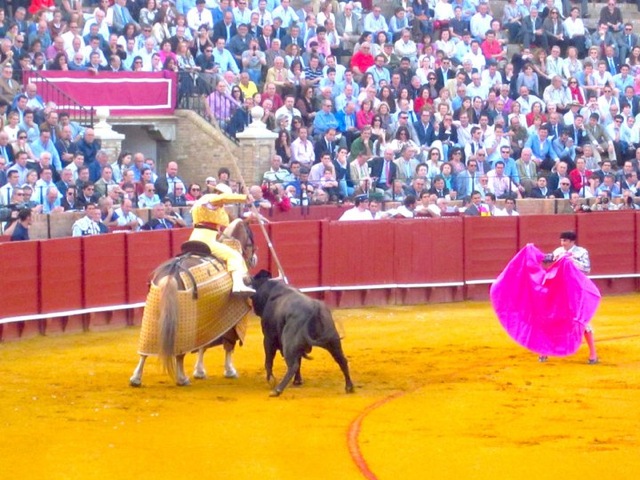 Dancing with the bull

Then at the end, as you watch the blood oozing across the bulls black skin, the matador comes in to dance with the bull and finally put his misery to an end with a sword. To be honest, in a strange twist i at times found myself rooting for the bull to upend the matador and would have been standing and cheering If it had happened.

Going in for the kill 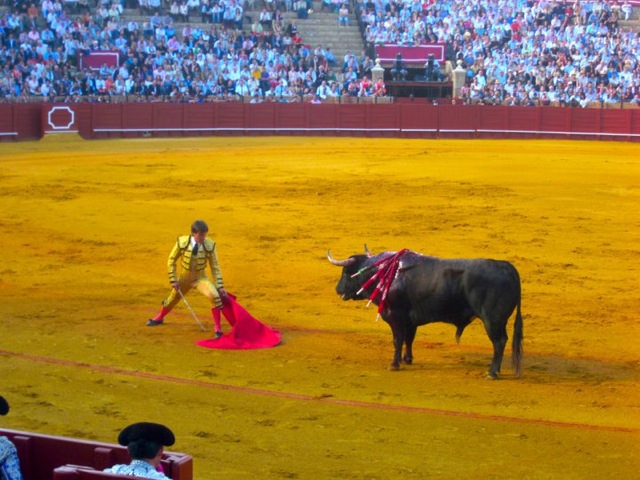 They continued this series of events for a total of 5 different bulls. After the fourth bull, the procession had become rather repetitive and somewhat difficult to watch so we decided to head out. The bullfight itself was one of the strager, and cruerler things I have ever seen but am glad to say that I have experienced one. It is not an event that I ever plan on attending again, but all in all it was an unforgettable experience and if you have the chance I would say you should check it out, as it was quite a cultural event.

The next day, our good friend Shane, who we had traveled all across of Europe with was coming to spend 5 days with us in Sevilla! He arrived in Sevilla on the 27th afternoon, and we spent the week taking him to all of our favorite spots and indoctrinating him into our ridiculous Spanish lifestyle. We did our traditional tourist spin, which included the alcazar, city center, cathedral, etc. The we took him on the more fun tour, which covered that of our crazy night lives in Sevilla. We too him to cien and bandalai on wed, Buddha on Thursday, botellon’d, river chilled, and partook in further debauchery over the weekend.

Since Nick and Mike were still off on their ridiculous Eurotrip (they were gone for another 10 days after we came back to Sevilla) we had a couple extra bedrooms available in the house, so I managed to somehow convince Mama Rosa in Spanish to let him stay with us for a couple nights, which was nice. While Shane was staying with us, finally began to hit me how ridiculous our lives were, and how hard we were partying in Spain as Shane was shocked by how often we went out, and how late into the night we were out until. God I miss those days. 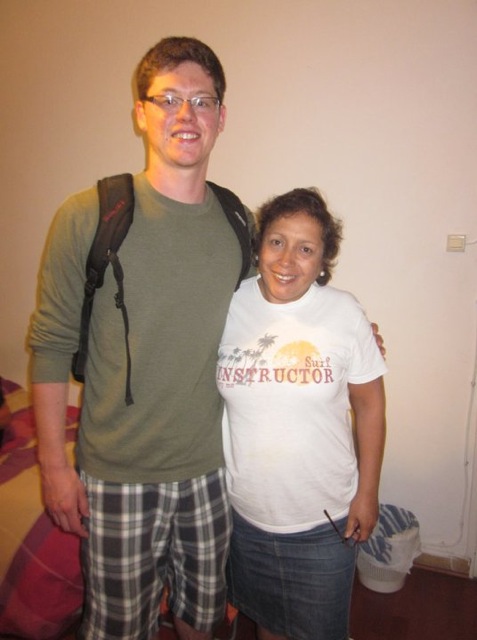 At some point in between the bullfight and the end of our semester, we also headed out to a soccer game. Figured if we were in Spain, we had to go see one. There are two soccer teams in Sevilla, Real Betis and Sevilla FC, and the town is split between supporters of both teams. Sevilla FC plays in La Liga, which is the Spanish Premier League, whereas Betis was in the league below.

We chose to go to a Betis game, as they were in contention for their leagues championship, and the games were also much cheaper. I believe when we went, they were playing Tenerife South, which is a team from the Canary Islands in their league. The Game was especially exciting, because if Betis managed to win the game, the pretty much ensured that they would be moving up into the premier league, La Liga, for the next season. As you can imagine, it was a packed house, and all of the fans were going nuts!

Betis ended up winning the game, and it was a wild scene as the fans stormed onto the field in celebration. It was pretty funny watching the mases of people that had run onto the field run back towards the stands even faster when they came out as they thought the police were coming. 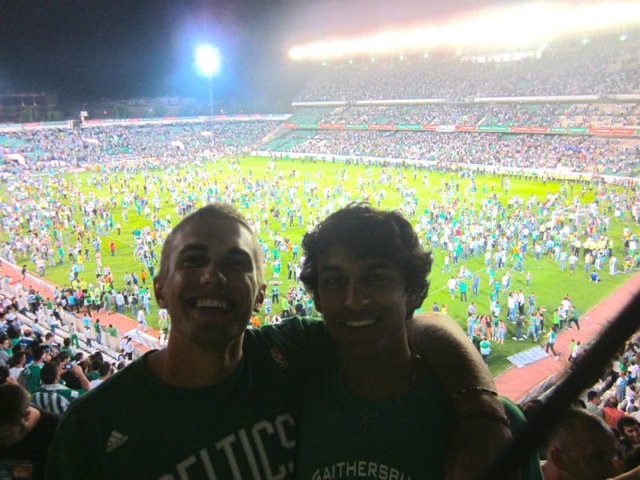 The Betis Boys, all decked out in our Betis Green!

Betis fans were beeping their horns and singing drunken cheers all night long in what was yet another memorable event in our semester.

All in all, it was another amazing week in an amazing 4 months and continued the brilliant 24 day spring break I had managed to work into my school schedule.