Hope everyone is doing amazing! I’m still running super behind on the blog, but doing my best to catch up. Just hard for me to rationalize spending time typing these up when i could be at the river with the API family under the sevilla sun. Regardless, i should have all of our excursions and some Sevilla stories up real soon. I’m gonna get out of chronological order here, but figured i should just post whatever i’ve got soo here’s some details on our absolutely incredible trip to Lagos!

I have found paradise. We Just got back from one of the most epic excursions of my life! We went on an incredible weekend trip to the beautiful beach city of Lagos, Portugal. We went with an organization called Discover Sevilla that organizes trips throughout the region, and it turned out to be a great decision. We went for a total of 2 nights, 3 days and weren’t sober for a minute of it, as the constant party that has been studying abroad just continued at a feverish pace in Lagos.

After yet another wild night of partying during Feria, we all woke up early Friday morning to meet up at 9:30 at the bus stop to head off to Lagos. We met up with all of our API buds, and while waiting for the buses to take off, I brilliantly managed to break the bottle of rum in my bag making for an amusing start to the trip (and causing my boxers to stink of Ron for a little haha). We took off on the 3-hour or so journey, and after a quick pit stop arrived in Lagos! Wasn’t sure what to expect with the hotel, but it turned out to be really really nice. 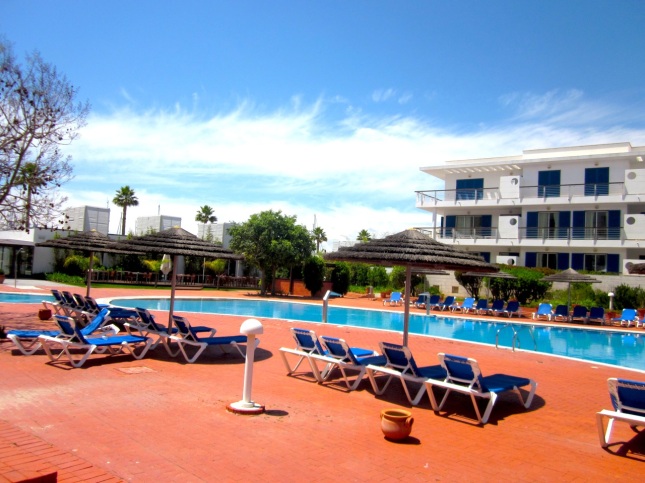 Marina by the hotel 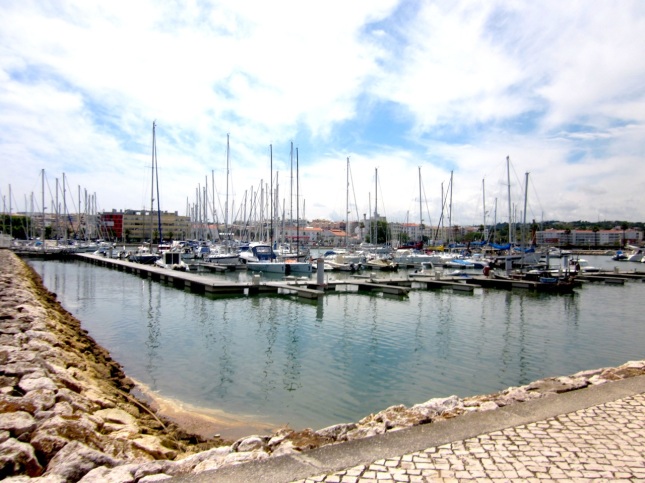 Nick, Hirsh and I were all sharing a room that was fully equipped with a full kitchen and an awesome balcony that was overlooking the pool area, and allowed us to get to our friends rooms via some balcony hopping. After tossing our bags down, we signed up for the Sunday Sangria cruise and headed to the grocery store. Lucas, Scottie and I were struggling with what to buy as the beer was warm, and ended up stumbling across a cold mini keg of sangres beer that we thought would be a good idea to split. Upon arriving at the beach, we quickly realized it was not a good decision as it might as well have been labeled a foam keg haha but we were having too much fun on the beach to worry about anything but fun and the sun. 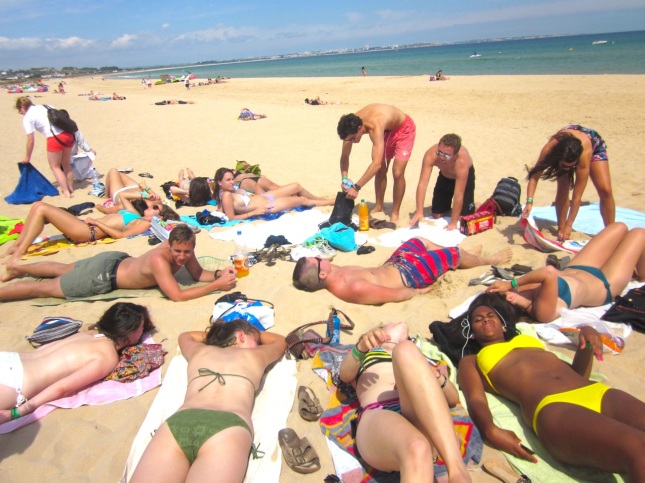 The water was chilly, but nothing a few beers and some good friends couldn’t fix so we all spent some time hanging out in the gorgeous water. We played some soccer, Lucas and I got embarrassingly destroyed in a game of volleyball, and all in all had an awesome time hanging out at the beach. Discover Sevilla was taking us on a supposedly 25 minute bus trip to see what was supposed to be one the prettiest sunsets of all time at the end of the world (Literally what everyone thought was the end of the world before Columbus found the Americas) so we headed back to the hotel to meet up at around 630.

The bus ride turned out to actually be more like 45 minutes, and nearly everyone including me passed out immediately from exhaustion induced from travel, the beach, and unhealthy amounts of fluids. When we got there, unfortunately it was an extremely cloudy evening so we were unable to see the sunset we were looking forward to, but had a great time nonetheless. There were awe-inspiring cliffs with epic drops down to the picturesque blue water, and it was an amazing experience.

The boys at the end of the world 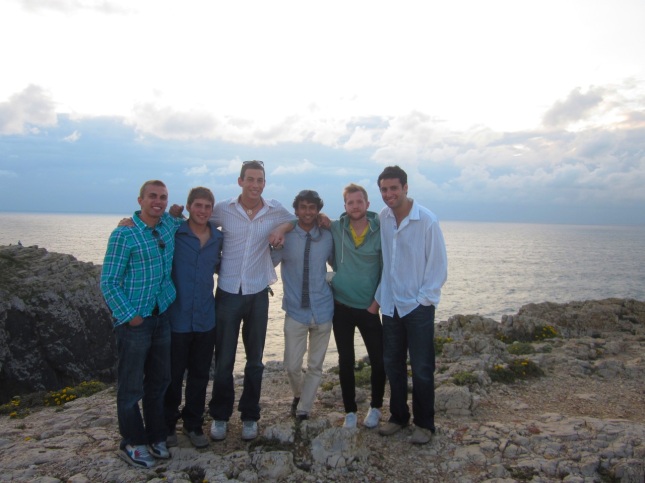 Too cloudy for the sunset but still amazing

After sleeping through the bus-ride back to the hotel, everyone went and grabbed dinner before the evening’s festivities. After a pasta dinner at our place, we cracked open some cold sangres and began to get ready for our night out in Lagos. Discover Sevilla had organized a trip for us to go to a bar/discoteca called Gran Café, so we grabbed our two free drink vouchers and headed inside for a fun-filled night of dancing with 30 of our closest API friends.

Next morning, I got up naturally having missed breakfast but more than ready to hit the beach with everyone. We all grabbed our snacks and drinks, and took a 20 minute walk to what must have been the prettiest beach spot I’ve ever seen. To get there, we had to wade through knee deep water and climb through a couple caves, till we found a spot we claimed as API’s private beach.

Climbing through caves to get to our sweet beach!

To give you an idea of how incredible this place was, Angelina Jolie’s summer home was rumored to be located on top of the sandstone cliffs overlooking our beach (Whether there’s any truth or not to the rumor’s to be determined, but I’m gonna go with it). We spent the lovely afternoon tossing the Frisbee around, and swimming through the gorgeous water and in and around the cave formations in the water. We managed to find a rock platform that fit all of us on it and re-named that sacred rock APIsland haha. 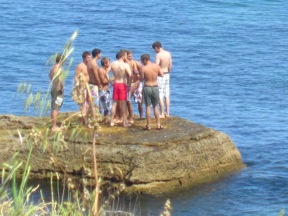 After spending the lovely afternoon on the beach, we all decided to head back to the hotel to get ready for dinner. That night for dinner, as we all had kitchens in our respective apartment bedroom things, we had decided to have an API potluck! With 30 drunken kids, and unsure of who could actually cook I was a little skeptical as to whether it would actually work out, but it turned out to be a grand success. I had decided to make some Asian stir-fry, so ran to the grocery store and bought all the ingredients I needed and got back and started cooking. It’s been nearly 5 months since i’ve actually cooked, and doing so once more reminded me of how much I thoroughly enjoy doing so. I ended up buying way too much food, but my teriyaki stir-fry turned out pretty well and I headed over to the girls room down the hall for the potluck. There was tons of delicious food, and I was extremely impressed it worked out so well. 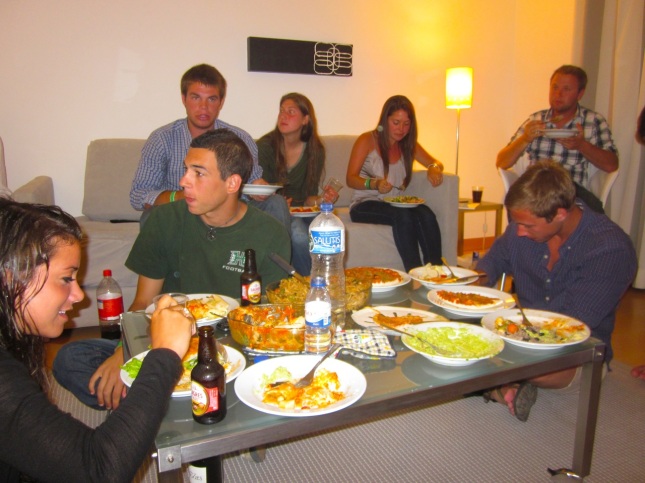 Delicious! I made the stir-fry up top

After dinner, we started playing one of our favorite API drinking games: Cheers, Governor! Basically the way the game works is that everyone in the circle counts up to 21, and when you get to 21 everyone says Cheers, Governor! and drinks. The person who said 21 then has to make up a ridiculous rule for a certain number, so for example on 10 instead of saying the number 10, you would have to get up and do the chicken dance or something of that nature. If anyone messes up, then you start again from the beginning so as you can imagine the game becomes much more difficult as you drink more and more rules are added. We must have had 20 or so people playing, and the rules got pretty ridiculous, ranging from complementing Jared to unbuttoning someones shirt haha. After playing for what felt like forever, we all finished our drinks and headed off for another fun night on the town! 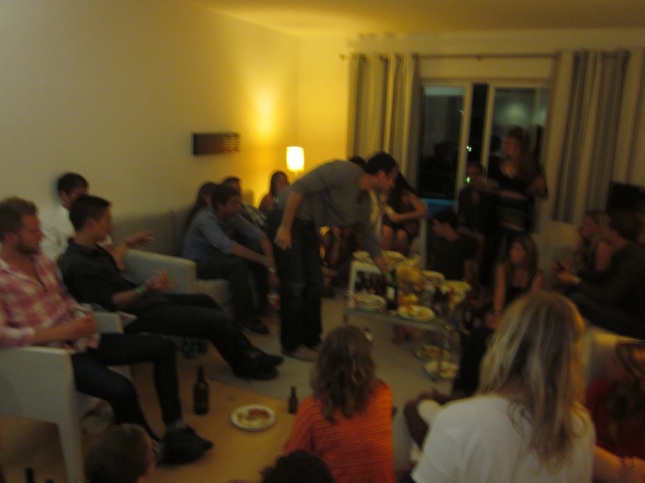 Most of us had signed up for a Sangria cruise that was being offered by the organization we were traveling with, so the next morning, we woke up extremely excited to head off on the beautiful water. We met up in the lobby and got to the boats around 11am, and the party began. We managed to get most of our API friends on one boat, and we set off into the unbelievably blue water with Salsa music in our ears, and cups of fruity sangria in our hands.

Once we got pretty far out into the water, they told us that we could all jump off the boat, and so we all jumped together on a count of three into the freezing cold water, which was a blast. Here’s a video of us all jumping off!

As part of our cruise, along with the unlimited Sangria they took us off in a small motorboat into the incredible grotto caves. The caves were gorgeous, and saw by far the prettiest water my eyes have ever seen. 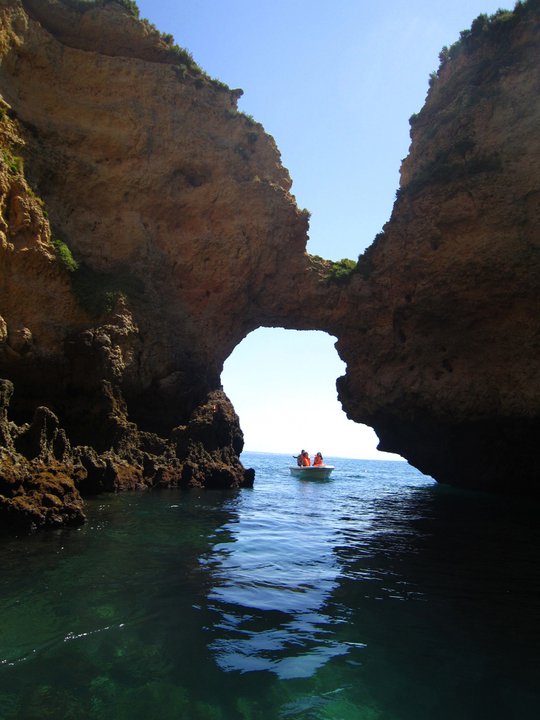 2 hours, and 15 cups of Sangria or so later we got back to the dock and headed straight to the beach to hang out for the rest of the day before we all had to head back home to Sevilla. As bummed as we all were to head home from paradise, that last sentence made us all shake our heads and realize we are going HOME to one of the most beautiful cities in the entire world. All in the entire trip was an absolute blast, and one of the most fun weekends I’ve ever had. If you ever have the opportunity to visit the city, do it.

As amazing as Lagos was, it was truly the people who made the trip. I honestly believe I would have had just as much fun at Ocean Shitty, Maryland as long as I was with my good friends in API. I’ve never met this large a group of people who all get along so well together, and over the past 4 months we have become one huge, incredibly drunk, loving family and I wouldn’t trade my time with my Ah-pee family for the world. Really strange to think that Lagos was our last big trip, and I as much as I hate to admit it I only have 6 more days of this fairytale dreamland life I’m leading.

I love you API 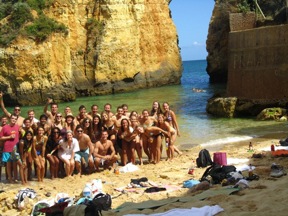