We got back from Barcelona last night and had an absolutely incredible weekend vacation. Was great to see all of our good friends and the city. I’ll do my best to get details on that trip posted sometime in the next couple days. Mike threw together a short trailer for a trip video that he’s working on to give you an idea of the shenanigans that took place… Take a look!

In this post i’ll attempt to summarize the wild week or so that took place from around March 17th – March 27th.

The night before we all went off to Extremadura happened to be St.Patty’s Day. All the API kids met up at the river and formed a giant sea of green, with something like 30 or so awesome people who were ready to party. Our friend Robyn was visiting from Oxford so she joined us, and we all hung out by the river for a while. After some time we all went home to get ready for the late evening portion of the festivities. Decked out in ridiculous amounts of green, we had a big pre-game at the Suncy girls place and then headed off to a discoteca called Abril!

Mama Rosa was ready to party for St.Patty’s day! 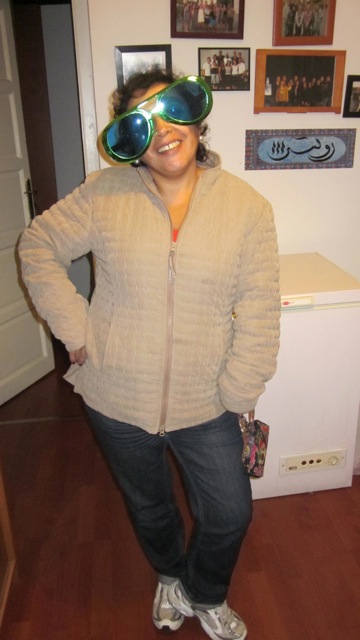 The crazy night was part of the reason it was so hard to get up for extremadura haha..Just posted about that trip but here it is again if you wanna read more about it .. https://sahilrahman.wordpress.com/2011/04/03/extremadura/

The weekend we were in Extremadura, our good friend from Maryland, Laura Rogers (more commonly referred to as Tequila Rogers due to a certain drinking habit of hers..), had arrived in Sevilla to spend her spring break with us! She came over to the residencia after we got back on Sunday, and it was great to see her! 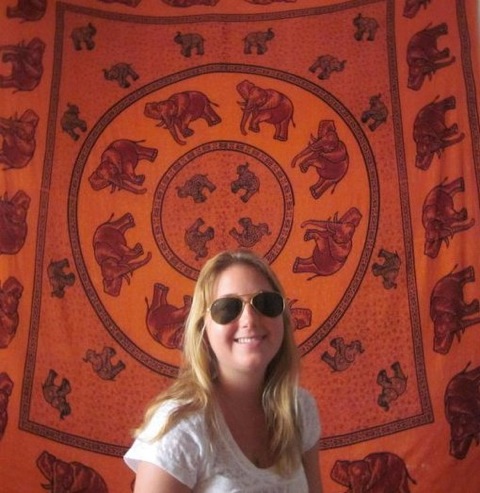 **On a side note before i forget, here is another sweet video trailer Mike made the other day about Sevilla. It’s only a minute long so definitely take a look when you get a chance. He got a new camera and the HD quality is awesome**

Anyhow, We spent the rest of the day hanging out with Laura and getting mentally prepared for the ridiculous marathon of partying that was sure to ensue over the course of the following week. It was Maryland spring break, and there were a bunch of friends from school visiting Sevilla so we had a nice dinner with them at a tapas restaurant to kick off what would be a wild week.. 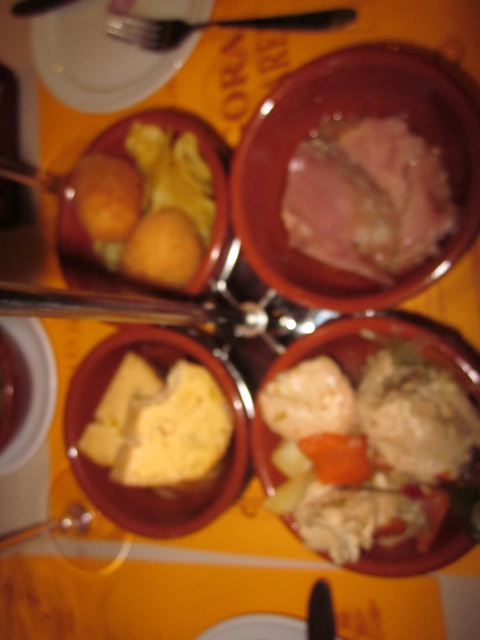 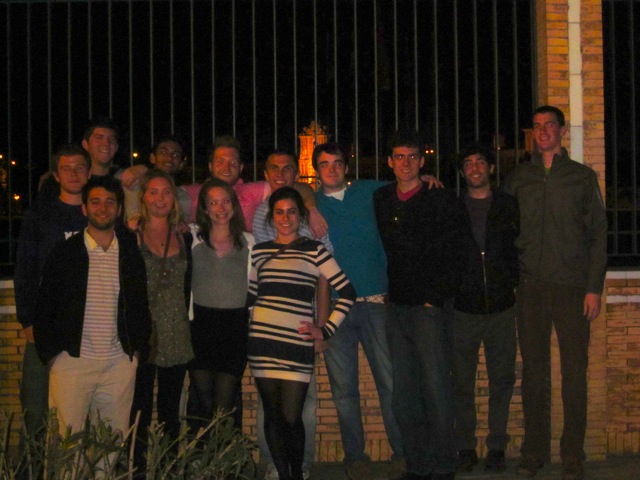 Monday happened to be our buddy Jared’s 21st birthday, so that night we all went out to celebrate. We started at one of our favorite bars on Betis, Alambique, and all seemed to fall victim to the .70 cent tequila shots being offered that evening. Afer that, we headed off to a discoteca called Abril for a wild Monday night API dance party. Safe to say Jared had an awesome 21st birthday haha

Tequila in our residencia 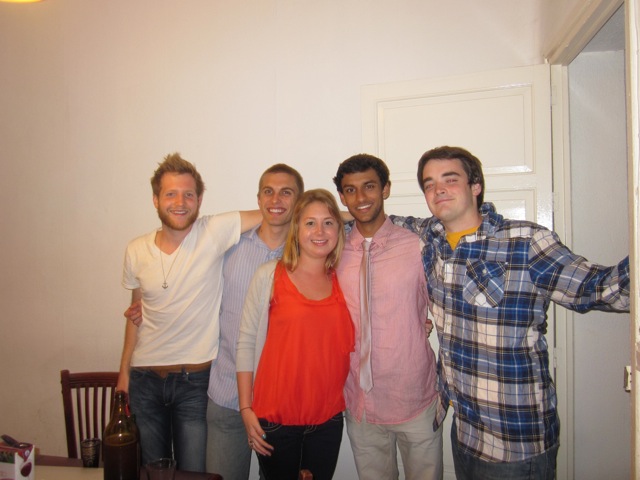 Tuesday afternoon was awesome. We don’t have classes, so after lazing around for a while i got bored and hit up my homegurl Helen to see what she was up to. After all was said and done, we ended up going to the Chino store down the road and left with these sweet little guns which shoot out these big ping pong ball things and a Hula Hoop. Naturally we headed back to my place and ended up having hula hoop competitions and shooting each other with ping pong balls for a couple hours haha. 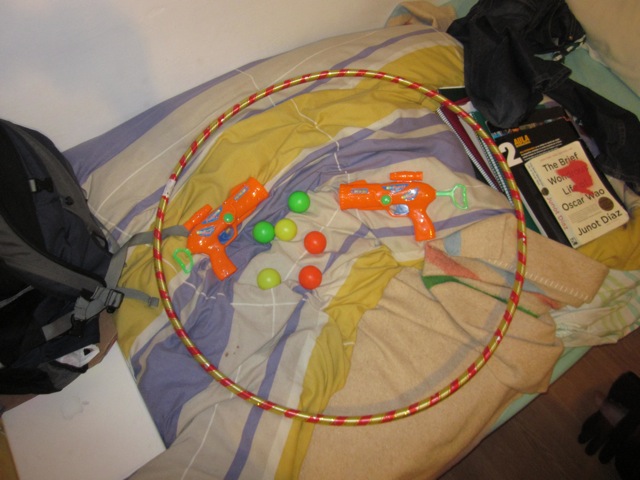 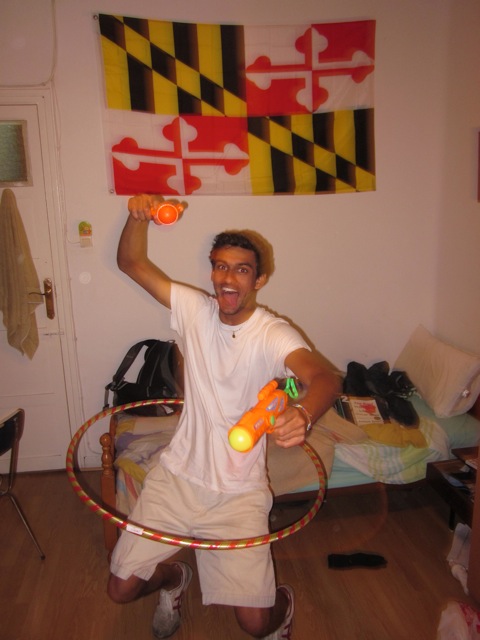 Afterwards, we met up with our friend Chelsea, who was also visiting from UMD and hung out by the river all day

Eating some yummy paella by the river 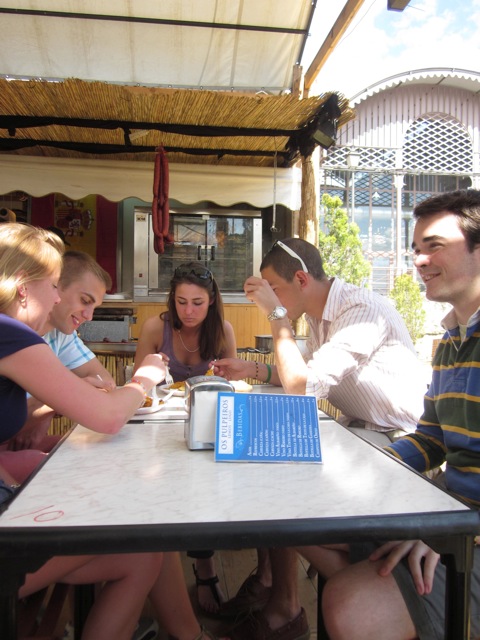 At night, we went out for a fun night on Betis. We hit up a cool shots bar I’d never been to called Long Islanders, which was an extremely American bar. They had a shot for all the 50 states in the US, and so naturally we had to try a few of the Maryland shots. Mark Kane and co. had joined us out that evening so was fun to go out with more Marylanders again. Afterwards, we went to another extremely American bar called fundacion. It was a good time, but rather strange being completely surrounded by Americans, and felt like we were bar in CP at cornerstone or something opposed to a bar in Sevilla.

Lucas and his buddy from school won a beer pong competition! 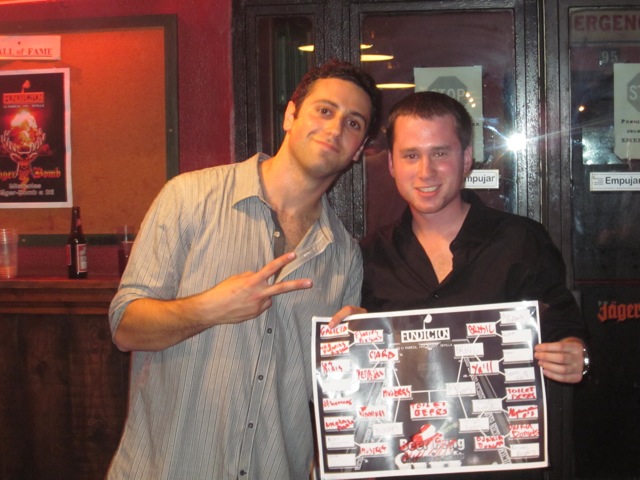 Wednesday after a full day of classes and another delicious fajita night we got ready to go out once more. Wednesdays is hip-hop night at a discoteca called Bandalai, so met up with some API amigas and pre-gamed at the girls place and then headed over to the club for a fun dance party that night. Bandalai is always a fun time because we met this ridiculous club promoter named Simon, who absolutely LOVES Americans. He always gets us in to the club for free and gets us all rounds of drinks, and has some crazy dance moves and loves to scream ENERGY all the time. We also happen to see him what feels like every night we got out for some reason or another haha

Made some new Spanish amigos that night

Thursday night, we botellon’d for a bit and then hit up Buddha for the first time in while. Thursday also marked what must have been the 3rd or 4th night in a row that I wore a tie that week. Not quite sure why, but regardless of where we were going, I wore a tie for what felt like every single night haha.

Tequila and I at buddha 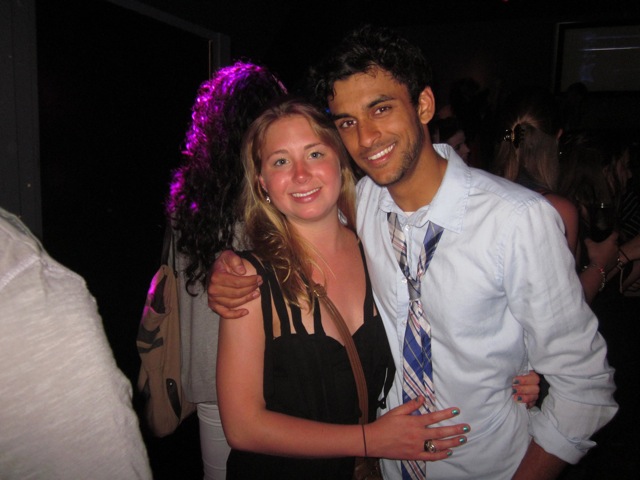 Friday may have been the wildest day of all. I started out the day by going to this amazing market in Triana which was filled with fresh vegetables and fruits. Laura got some delicious strawberries, and we hung by the river for a little before lunch. 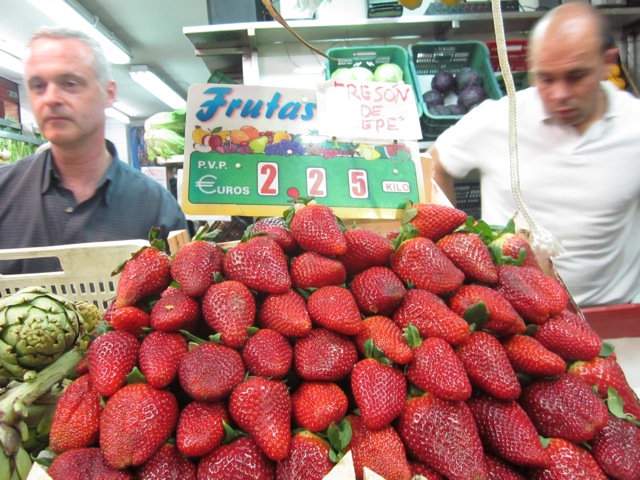 Friday was a giant Primavera (Spring) festival in the city, which basically meant that thousands of young people would be gathering outside together to have one incredibly large botellon or all day party. Friday also marked the first day that Oliver’s family arrived to town to visit for a few days! We met up with them and the a bunch of Ah-Pee (API) kids by the river and began our afternoon that was full of cruzcampo treinta y cuatros and fun! 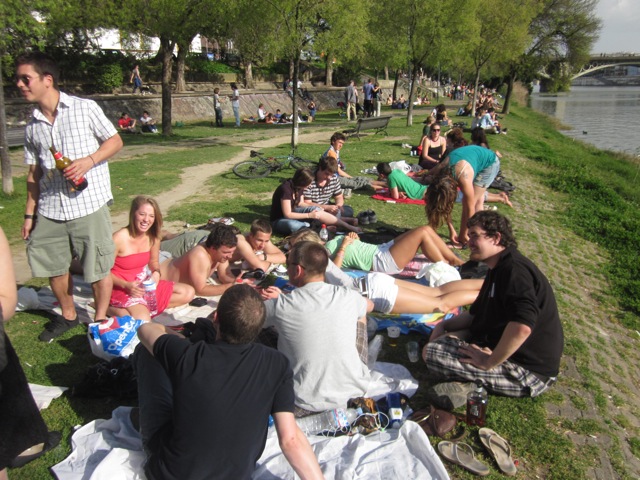 After a while, we headed up to the open-air international food stalls that are set up by the river and Oliver started buying us drinks. One thing led to another, and next thing I know I ended up on stage dancing to Shakira’s “Waka Waka” with a bunch of performing Spaniards haha. 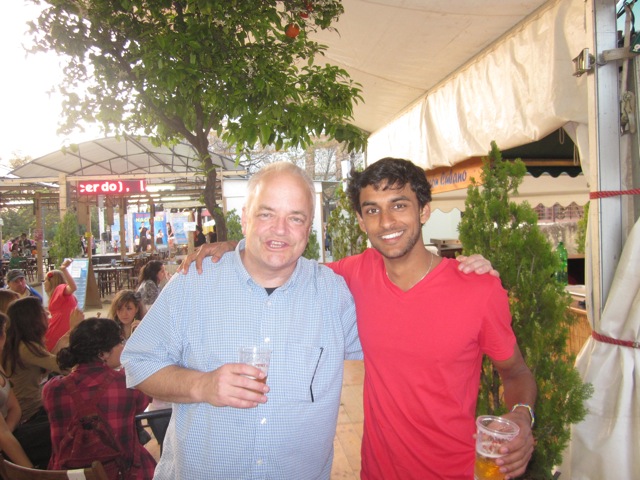 Afterwards, we ventured off to find this giant botellon. Kari Treasure and I managed to get separated from the group, and ended up wandering through crowds of hundreds of Spaniards for a while. We ended up hanging on a dock by the river and then after what felt like hours finally made it back to our casa.

My friends Sara and Anna were visiting us from Alicante, so met up with them to grab dinner at a great tapas restaurant called Taberna Macuro. It was real nice seeing them and we all had a good time. Afterwards, we headed to Alambique and Demo for a little before calling it a night.

Saturday was a rest & recovery day after our ridiculous week of partying. Met up with Sara and Anna by the river for a little bit, and then went exploring with Caitlin for a little bit. We grabbed some pizza at a little restaurant, and they had one called the erotica pizza so naturally we had to order it haha. Afterwards, we met up with Ollie, Hirsh and Henry at the river. That night, Anne (Mrs.Shepard) treated us out to a delicious dinner at a fantastic restaurant called Coloniales, marking the end of our ridiculous, fun week. 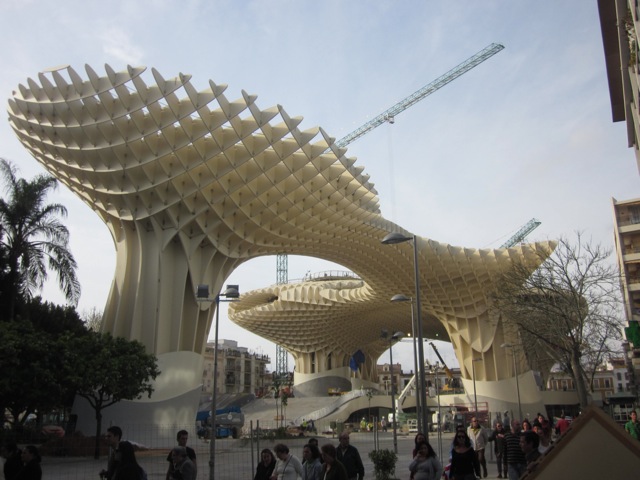 Caitlin and I with our Erotica pizza…it turned out to be delicious too! 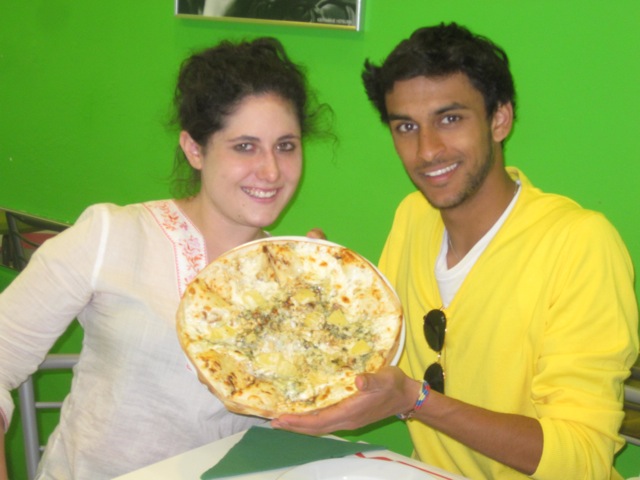 It was a really cool experience seeing so many friends from Maryland in one week, and it was interesting because we would literally run into different friends from UMD every night, some of whom we didn’t even know were in Sevilla. Had a blast spending time with Laura and the Shepards, and the whole week got me excited to see friends back in the states!

Oliver with all his parents 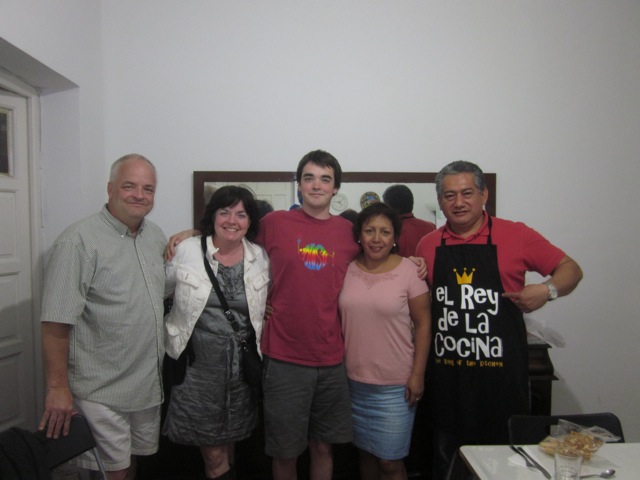 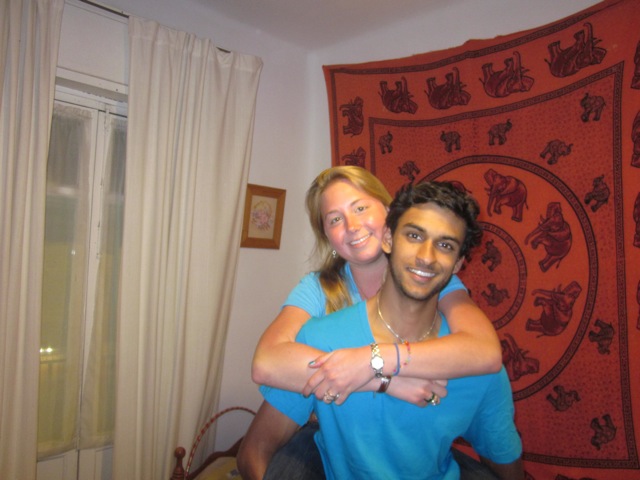 One thought on “Tequila Rogers and the Shepards come to Sevilla!”